Krobar01, or simply Krobar, is a 2017 player and builder known for his numerous builds at bases such as Summermelon, Numenor, Endcursion, and Whitehaven. He is also a former member of the SpawnMasons.

Krobar01 joined 2b2t on January 20, 2017. He lived in relative obscurity, grinding gear and farming materials. Upon becoming bored of this, Krobar decided to begin Follytonvilleshire. It was there that he built his "Keep" build, which prominently carried many of the design elements later to shine in his M.O.A.K (Mother Of All Keeps) at Numenor. He also built his Mad Scientist Aquarium and Happy Ogre Sunken Pyramidal Arboretum and Bar, built in a drained out ocean monument.[1] His builds gained the attention of players due to his posts on r/2b2t. He was invited to Wintermelon, though declined as he was in the middle of a build. He had Follytonvilleshire added to The Museum, and the base lasted ungriefed until jared2013 destroyed it during his Month of Destruction.

Word of Krobar01's building capabilities quickly spread, and he was invited to join the SpawnMasons, as well as the base Summermelon. He left Follytonvilleshire to join Summermelon in April 2017, where he based for a relatively short amount of time, as the base lasted only four months. Even so, Krobar had enough time to construct two large builds. The base was griefed on July 28, 2017, by Fit and AlphaComputer, who, despite being fellow SpawnMasons, killed Krobar during the grief. Following the event, Krobar was instrumental in bringing about Fit and AlphaComputer's removal from the SpawnMasons, as they had broken the SpawnMason code for harming another member. Krobar left the SpawnMasons soon afterward.

Before Summermelon was griefed, Krobar01 was invited to Space Jam by other members of the SpawnMasons. The base fell before Krobar01 could build a meaningful amount, so he decided to move to a new spot, which he titled "Endcursion", where he built before returning to Summermelon. Krobar01 abandoned the base after it was compromised by 0x22 with the Authentication Exploit. 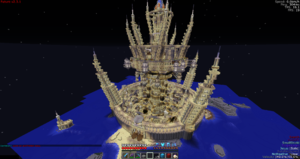 Following the grief of Summermelon, Krobar01 was invited to Numenor by Offtopia, in August 2017. In Krobar01's words, "...[Offtopia] told me to build something big, so I built M.O.A.K." Following its grief as a result of a leak from the BoeMeccan Witch Trials, M.O.A.K. received overwhelming praise from the community as a whole.[2]

Upon the fall of Numenor and the foundation of Block Game Jerusalem, Krobar01 was invited to BGJ. He built intermittently there throughout 2018 and 2019, constructing his so-called 'Hovel', Skull, and Eye. He also helped in the initial design of the unfinished Temple at the base.

After the fall of Numenor, Krobar01 moved to Mu. There, he contributed a little, mostly restricted to bombing the massive central basin of the base.

After duping extensively at various locations, Krobar01 brought all of the items to a single spot, where he began building in September 2018. He started with a broken ship, then put the base's namesake, Poseidon, in the middle. The Poseidon statue was originally meant to be placed at Mu, although this did not happen as they altered the theme system. jared2013 found Poseidon but did not grief it. 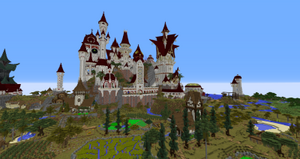 In August 2020, Krobar01 was invited by jared2013 to his new base with orsond, then called 'Teton'. After building the vast majority of the location singlehandedly, he was given ownership of the base, to which he invited many builders who together built what has been hailed as one of the best bases in the server's history. His main build at the location was the large central castle, but he also built a large amount of the surrounding farmland and houses, as well as contributions to many other builds at the base. He helped to grief the base upon its leak.

Retrieved from "https://2b2t.miraheze.org/w/index.php?title=Krobar01&oldid=62298"
Categories:
Cookies help us deliver our services. By using our services, you agree to our use of cookies.