Jonathan222 is a well-known newfag that has built several bases and managed several 2b2t communities such as the 2b2t wiki, 2b2t Discord Archive, 2b2t Museum (pre-BoeMeccan Witch Trials, was demoted with all of the other helpers due to this incident), 2b2t Builders Guild, and 2b2t Explorers Guild. He is no longer playing on 2b2t and has not logged on in 12+ months.

Jonathan222 joined on the evening of June 8th, 2016 after this video showing up in his recommended videos tab on youtube. He explored around the wasteland filled with lavacasts and Spawnfaggots at (0, 0). Expecting help, he entered a portal which brought him to the nether hub, filled with many spawnfags. He was killed shortly after being trapped inside of a portal. Bored, he explored out of spawn till around 1000 blocks, where he died from starvation. Not knowing what to do, a player named Strike4U PMed Jonathan222 to go to a melon farm (most likely now griefed) around 2000 blocks out. Jonathan222 made it to the melon farm, only to experience what is known as low tps. The melon would never break, and Jonathan222 got fisted to death a few minutes later before the melon finally broke.

Not knowing what to do, he continued traveling around spawn until he found the Highway. This time, Jonathan222 was successful on traveling. Within a day, he made it out to 100,000 blocks from spawn, got himself unenchanted diamond gear within 30 minutes of reaching 1.7+ chunks, and traveled further into the highway. After traveling another 30,000 blocks on the highway, he assumed he traveled far enough to make a small hut. However, he shortly died after he took fall damage from rubberbanding (low tps). Without an enderchest or bed, he was back at 0, 0 with nothing. He tried again on June 21st, 2016, this time he traveled on the Z+ highway. He made it to around 200,000 overworld, but died for starvation. Jonathan222 gave up because of how long the queue was. In late July 2016, Jonathan222 stopped playing untill the queue gets shorter. During late summer, he would create a faction/anarchy server for newfags that want a different anarchy experience. This died out however in September due to other 2b2t clones such as 4b4t, 9b9t, and Constantiam.

After the war ended, the queue shortened to a mere 50 players. Jonathan222 decided that it would be a good time to log on, because of the short queue times. Jonathan222 walked on the X+ highway to find 6 beds. Due to having more knowledge about the server, he was able to get several stacks of food including melons, bread, and apples. He placed a bed every 50,000 (overworld) blocks. He created a small base around 200,000 blocks from spawn to enchant gear and obtain valuables such as emeralds to trade with the nearby village. A few days later, he went back on his journey through the highway. In the end, he stopped around the 500,000-1,000,000 million region. 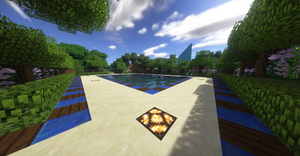 One of the sectors of 6Garden

In Late November 2016, Jonathan222 had several sets of maximum level armor and tools. After seeing several bases being toured by Fit, Jonathan222 wanted to build a small base of his own. After building his house on November 23rd, 2016, Jonathan222 had the idea to build a landscape-themed base. This base was called 6Garden, and slowly grew until its completion on October 2nd, 2017. 6Garden still stands as of February 3rd, 2019. Jonathan222 only invited one player to the base after being isolated from the rest of the server. In February 2017, He talked to the player named FireFox18, who recently joined from Fit. After a few days, Jonathan222 came to spawn to gear up FireFox18, however, they were both crystaled seconds after leaving (0, 0).

In October/November 2016, Jonathan222 became aware about the 2b2t wiki when a reddit post titled "Look at this shit from the wiki" with an image showing a page called Team Veteran Decay. Laughing irl, Jonathan222 came to clean up the mess on the wiki, only for the pages to be destroyed again. A month later. Dark_Annihilator and Niftyrobo created a new 2b2t wiki called "the 2b2t anarchy server wiki". This wiki removed bias from TheCampingRusher fans (such as Team Veteran Decay), alongside adding more information about bases, groups, and players. Jonathan222 thought it would be great to add his base to the wiki to show his project. In July 2017, Niftyrobo wanted the wiki to be destroyed because of how awful the wiki was. Jared2013 received bureaucrat-level admin status (meaning he cannot be demoted) and removed around 140 of the 280 pages at the time. Jared2013 was criticized of only keeping oldfag information. Jared alongside Niftyrobo were banned for mass vandalism. Jonathan222s main FANDOM account "Jonathan222" was banned for mentioning the term "newfag" despite editing it out. A day after the restoration, Jonathan222 (now under a new account) alongside several others received Admin status. Jonathan222 had around 600 edits around May 2018. On July 24th, 2018, all 2b2t wikis hosted by FANDOM were closed for violating their Terms of Service: Using profanity and leaking "private" information (apparently mentioning usernames and events such as Beardler leaking someones ip is against their TOS). FANDOM also compressed the entire wiki into an .xml/.txt file (wiki was 43 Megabytes in total text alone). On July 25th, 2018, The admins of the 2b2t anarchy server wiki decided to work with Jared2013 to create a new wiki on Miraheze. This time, newfag history and players are on the wiki.

The 2b2t museum, Beardler, and Bases

In February, 2018, Jonathan222 became good friends with Beardler for both being involved with the passive side of 2b2ts community. Jonathan222 received /op a week later. He has worked on several repairs on the museum. In March of 2018, Jonathan222 proposed a plan to build a massive base at spawn for the memes. Beardler created a group called Spawn Mark II (Spawn Revised). This base was 40,000 (overworld) blocks away from spawn and lasted 2 months. Jonathan222 was active and built a large stonebrick tower at the base. However, due to Beardlers awful security practices, he invited everyone he knew including known leakers such as Xamio (Keir) and Lifeisgood72 (griefer of Purgatory). Overall, 7 players participated in the base while 20 others were just there for the memes. No longer interested, Jonathan222 took some sets of armor and headed to (0, 0). There, he met Karbs. They spent the months of April and May hanging around at nether spawn doing random shit. Knowing that Spawn Mark II has no future do to security and placement, Jonathan222 headed back to 6Garden to plan a group base in late April. The plan was to build an ocean base with 7 others (members being Karbs, MagicEX, Xamio, digandbuilder, McButcher, xyzvp, and Zel0sGaming. all which were invited before May 25th, 2018). The only proposed name was Citta dei mattoni (City of Bricks), an ocean base located in the 500k-1mil region as a welcome to 1.13. The last player that was invited to Citta dei mattoni was Beardler, claiming that he will peek in from time to time, but he has other plans . Jonathan222 was invited to the newly formed Builders Guild the next day on May 25th, 2018.

Builders Haven and the Summer of 2018

Beardler formed the project called Assembly (revised several times to what we now call Builders Haven). Jonathan222 was one of the first members to be invited to this project. Worried that this project will become a failed disaster like Spawn Mark II, Jonathan222 created a new discord for the group and invited everyone to the new discord. Everyone from Citta dei mattoni received "Base Member" status, while everyone else had to send a lengthy application to Beardler and Jonathan222. Sadly, everyone from Citta dei mattoni (with the exception of McButcher who is has "Base Member" status and xyzvp who has "Pending" status) was kicked due to inactivity or suspicion. Most of the Citta dei mattoni members were at Purgatory I.

Effect from the BoeMeccan Witch Trials

After Beardler was accused of griefing Block Game Mecca and Bodecken, Beardler admitted to griefing the bases to keep him under control. During the time, he requested the members of Builders Haven to protect him and downvote people against him. This failed and made Builders Haven look like a museum recruitment center. Purgatory II was later griefed for revenge on Beardler. Everyone in Builders Haven was upset that Beardler is managing the project (note: Jonathan222 owns the Builders Haven discord). During the month of June, Bloctagon questioned Beardler about his actions. Beardler was kicked out after Bloctagon, and 1Charlie3 decided it was for the better. Beardler replied back with the well known Beardler is the Godfather meme, telling Bloctagon that he needs to respect his superiors, and he will work to have him removed. After Bloctagon refused to invite Beardler back, he then messages Jonathan222 to kick Bloctagon out as hes ruining Builders Haven, but nothing was done. Jonathan222 then became the Base Overseer of Builders Haven.

On the museum, Jonathan222, alongside several others were demoted to prevent another Beardler incident. Jonathan222 no longer is affiliated with The Museum.

After Builders Haven was griefed, Jonathan222 returned to spawn and started working on small spawn bases within 1000 blocks of the server. In September 2018, Jonathan222 founded a group that focused on helping players that needed help at spawn, which led to multiple spawn projects. The best attempt was a base created at 0, 0, on September 4th, 2018, lasting for 2 hours before being griefed. These spawn bases continued until early October, when Jonathan222 started to run out of resources. The last spawn base that was built during the Seventh Incursion, when Jonathan222 was with Gambino and a few others. In late October 2018, Jonathan222 decided it would be best to leave 2b2t, and returned to 6Garden. Today (as of December 2019), Jonathan222 no longer plays on the server, and has no plans on rejoining. He is no longer admin on the wiki.

Retrieved from "https://2b2t.miraheze.org/w/index.php?title=Jonathan222&oldid=50540"
Categories:
Cookies help us deliver our services. By using our services, you agree to our use of cookies.