The Jewish Internet Defense Force (JIDF) was a spawn base group created by Joey_Coconut in 2020. The JIDF would build Fort Aqua, and be instrumental in the revitalization of the Shortbus Caliphate. It is named after a controversial organization by the same name, which had a rather infamous reputation.

Upon returning to 2b2t after a long period of absence, Joey_Coconut began to advertise a 'Pink Floyd Vibe Group' in server chat. After rampant spamming of this, and other (much less accurate ones), a group slowly began to materialize. The retroactively-named Bearington was a spawn farm, named after one of the first members, SirBearington101. The name was selected as a joke, as SirBearington101 was a major source of annoyance to the group. FamilyPumpkin6 arrived at the location shortly thereafter. SirBearington101 blew up the base after being trolled by other members of the group.

JIDFBase was founded on the 20th of May, 2020, as a location for the new members (including Crawket, dcuz, Finstaa, leptosoma, Logik1x, LordGalvatronMC, and others) to meet. The base established the tradition of naming new bases after the most prominent feature of the previous base. The most notable build was FamilyPumpkin6's Doofenshmirtz Evil Incorporated building.[1] There was also a shitpost video made at the location by Joey_Coconut.[2] The base was relatively lasted until its grief on the 4th of July, 2020. The base had fallen inactive within 2 weeks of its foundation, however, as many members had quit the server, while Joey_Coconut and FamilyPumpkin6 had shifted their efforts to Hopen.

Doofbase was founded on the 23rd of July. In an effort to include NFPR members in the group's activities, the base was opened up to several of their members in addition of JIDF members. The base lasted two hours as a result.

Following the grief of Doofbase, Joey_Coconut, Crawket, and LordGalvatronMC founded Fort Aqua on 25 July, 2020. The location selected was an ocean monument that was speedily cleared out by several members of the JIDF. The base took shape quickly before being discovered by digandbuilder, who was showing his coordinates while streaming.[3] Following the base's discovery, Joey_Coconut decided to move the JIDF's operations to a revitalized Shortbus Caliphate. The residents of Fort Aqua griefed the base on the 1st of August, 2020. The main builders of the base (Crawket and LordGalvatronMC) were invited to Block Game Jerusalem shortly thereafter in thanks for their efforts at Fort Aqua. 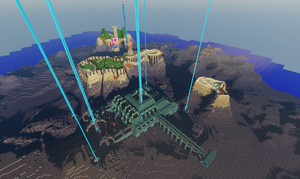 Retrieved from "https://2b2t.miraheze.org/w/index.php?title=JIDF&oldid=61680"
Categories:
Cookies help us deliver our services. By using our services, you agree to our use of cookies.