Ironfarm Base was a base built in late 2016. Many of the players here would later populate Block Game Mecca. 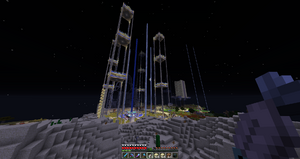 The namesake Iron Farm of the base 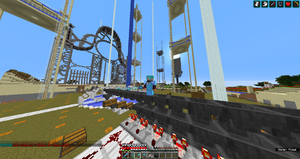 Joey_Coconut standing on a small sorter, jared2013's Hall of Thieves is visible in the background 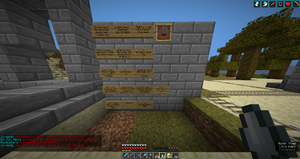 The sign wall outside of the Hall of Thieves 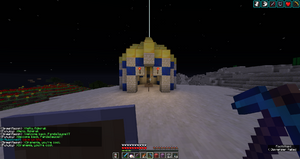 The "Grand Mosque of Medina". One sign labels the building, the other reads "Hail Joey_Coconut"

jared2013 and fr1kin founded Ironfarm Base following the destruction of another base of theirs they shared with 0xymoron and others, nearby. The main feature of this previous base was fr1kin's goldfarm.[1] Following the grief of La Rosa by Slappnbadkids, C4RTM4N asked jared2013 to befriend Slappnbadkids and attempt to get his items back. Instead, Slappnbadkids, jared2013, fr1kin, and, later C4RTM4N became friends.

AutismBot was invited to fr1kin and jared2013's Ironfarm Base. Due to obligation at other bases, Slappnbadkids created a new account, AutismBot, to use at the base. The group would stay there until after 11/11. When Jared learned of the 11/11 duplication, AutismBot and fr1kin were some of the first players to be notified. It was around this time range that jared2013 built the beginning of his "Hall of Thieves" there. Many oldfags visited, including, but not limited to iTristan and KnightVista. It was around this time that iTristan released a video of the base that included bedrock, this is before the bedrock coordinate exploit was known. This would come into play later. Ironfarm Base became a hub of items, and stashes were created all around the base. Unfortunately, the largest stash was compromised and griefed by a player using KnightVista's account. In addition, smaller bases were found on the outskirts of Ironfarm Base, and so the base was abandoned.

It was around this time that Block Game Mecca was founded, in January 2017, in the wake of the fall of C4RTM4N's 2b2t Creative Mode Project to Parthicus. In its early months, the membership of the Mecca was much smaller due to a strong suspicion of outsiders that bordered on paranoia. In this xenophobic Invictus Group mindset, none of the base members wanted to invite anyone new. Joey_Coconut, being a Meccaite, but not wanting to make the trip out there, planned to instead make a cadet base, and name it Medina, after another significant city associated with Muhammad. As a result, a small number know the base as "Block Game Medina". The idea would be to invite potential members and vet them even further than the liberum veto already in place concerning new members. When Joey raised this idea to the rest of the Meccaites, AutismBot gave him the coordinates to the base. Upon arriving, Joey found the beginnings of a great base, the previous inhabitants had built extensively, and, although they hadn't finished very many builds, there was a decent amount of gear left. The base would, however, prove useless. Few of the individuals Joey_Coconut invited to populate the base came to Medina, and the residents of Mecca had not invited anyone new to Mecca itself, meaning Joey_Coconut was functionally the only member of the base. That being said, Drathader used it as a spawn base from time to time.

The Teleportation Glitch came, and with it, easy access to Mecca. Parthicus used ChromeCrusher's bedrock exploit to find the Ironfarm Base. Recieving a warning from AlphaComputer about the eminent destruction of the base, AutismBot told Joey to prepare to teleport and escape the base. Joey left on March 30. Parthicus reached and destroyed the base the next day.

Retrieved from "https://2b2t.miraheze.org/w/index.php?title=Ironfarm_Base&oldid=49476"
Categories:
Cookies help us deliver our services. By using our services, you agree to our use of cookies.