Invictus was a base group created as a result of the influx of players from TheCampingRusher's video series. It grew to include several individuals who would later achieve fame and/or notoriety individually, as a part of the Invictus Group, or, later, Block Game Mecca.

Vertrix and a player called "Russian" created the initial base, which they called Invictus. After realizing that both of them had had professional building experience, they decided they would only recruit others with this same skillset and mindset. While this was more a guideline than a rule, many players subsequently joined the group.

After founding Invictus I (then, simply called Invictus), Vertrix and Russian started recruiting. The first players recruited left quickly; there were serious issues with player retention. Some of the first players to stay were named Fogel_2 and Screams. Russian disappeared from the server, so Fogel_2 took over his role as co-leader. The base began to take shape. Screams and Vertrix would run into Slappnbadkids independently of eachother, and would both invite and vouch for him. Slappnbadkids would then invite Juicybear, b3astplay3r, TechReadyGamer, TaurusBabe, chairman_112, PhantomSB, and GetDroppedKids. GetDroppedKids invited Donster to the base without telling any of the other members. Donster began sending messages to Vertrix, using the account JaredIsKing, describing things about the base that only someone who'd seen it would know. Out of fear their base might be discovered, the base was destroyed and GetDroppedKids was kicked. Invictus would move to a new location move to a new location. Invictus I lasted under a month. 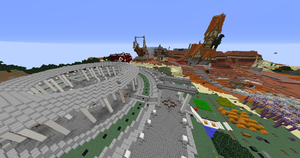 Invictus II, in a mildly griefed world download, b3astslay3r's arena in the foreground, some of Vertrix's houses in the background

The leadership in the group shifted following the move, at the helm was now the trinity of Vertrix, Slappnbadkids, and b3stplay3r. The group began to work on Invictus II (sometimes called Autismbot's 1Mil Base), and the base was progressing steadily. Drathader, Sophrosyne, TooMuchAdvil, TCOJC, JackGage joejoe455, and Joey_Coconut were invited around this time. Slappnbadkids was experimenting with the BedTP exploit, when he accidentally discovered La Rosa, a large base started in the beginning of 2016. The group moved to raid the base, carrying off a load of riches. A book was found claiming the base was abandoned so they decided only to rob the base and not grief it. As it turned out, C4RTM4N still lived there and was unhappy about all his possessions being stolen. He made this known, alerting the Invictus group to the fact that La Rosa was very much still active. As a result, Slappnbadkids decided to grief the base for the name recognition and notoriety. Chairman_112 achieved fame by insiding NedaT's faction, Team Aurora. In light of this, NedaT was invited to Invictus II to do a base tour[1] and to 1 v 1 chairman_112[2], following the leak of the base by a new member, PhantomOf2b2t. Mines also did a tour.[3] The base lasted until late September 2016. As the base was only leaked and not raided, the group moved to save the items. The issue was no one knew who leaked the base immediately, so about half of the group consisting of Slappnbadkids, Vertrix, b3astslay3r, Drathader, Sophrosyne, and Joey_Coconut took all the items and stashed them several thousand blocks away for safekeeping. Once it was determined that PhantomOf2b2t was the leaker, what was left of the group reassembled, and determined it was time to move. Many members of the group departed from the server. 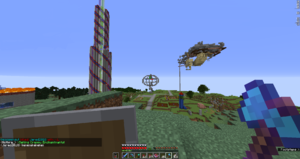 A picture of Obliviscaris, post-grief

Obliviscaris did not last long, Slappnbadkids' association with the 4th Reich and his dislike of NedaT caused TechReadyGamer to leak the base after only a few weeks. TechReadyGamer then quit the server. The base lasted less than 2 weeks, and had only just begun to take shape when the grief happened.

The End of Invictus

The grief of Obliviscaris was demoralizing to the Invictus Group as a whole, much of the group's wealth was lost, and a core member from very early in the group had betrayed them out of spite. This would be the end of the Invictus Group as an organization. Several members quit the server, several more took a break, a few decided to go out on their own, and the rest were invited to C4RTM4N's 2b2t Creative Mode Project. It is worth noting that all of the members of the Invictus Group that remained on the server eventually would end up at Block Game Mecca.

Members (in order of achieving membership)

Others who have been forgotten

Retrieved from "https://2b2t.miraheze.org/w/index.php?title=Invictus&oldid=50048"
Categories:
Cookies help us deliver our services. By using our services, you agree to our use of cookies.