Infrared was a large group led and founded by RetronautX. The group was known for its abundance of spawnfag and pvp-er membership and its membership in the Alpha Alliance. The group is also known for its participation in VoPerium, The Voperium Vs. Infrared, and the Alpha Alliance Vs. United Group Embassy conflicts. The group has had several reforms/disbands and but arguably remained a strong force on the server, until its disbandment in summer 2018.

Infrared (previously known as Inferno) was founded in late October 2017 with the help of the founder's good friend Retronautx. Retronautx invited a handful of friends to join the team, including Metrez and IHackedWalmart. The founder recruited members JoSaZa and Klimax at spawn to help Inferno grow. Once Inferno had about 5-10 members, they erected a headquarters approximately 500k blocks out in the overworld. The headquarters lasted a few weeks until a conflict begun between VoCo (the Vortex Coalition) and the Emperium (known as the Vo-Perium war).

A member from the Emperium, Racewizard was infiltrating Inferno, and obtained a high rank within the group, compromising their HQ. In retaliation, Inferno made an alliance with VoCo to help combat The Emperium's power. The Vo-Perium war lasted a mere three weeks, with little actually occurring. Emperium did manage to send many insiders into Inferno using the same tactics as they used on Visionary. As a result, several Inferno bases were griefed, most notably their HQ, and Paragon (a base that Inferno claimed). After the Vo-Perium war ended, VoCo and Emperium put their differences aside and made an alliance, but Emperium remained hostile to Inferno. As a result, The Emperium ended their alliance with VoCo.

The End of Phase I

Around this time, Retronautx and the founder were arguing on the future direction of the group. Due to frustration, the founder left Inferno and placed Retronautx in charge. Due to insiding, griefing and lack of player activity, Retronautx called for reforms which led to the birth of Infrared.

Infrared was a fresh start after the fall of Inferno. A new discord was set up, with the old members from Inferno joining, as well as many new members. At this time, the name of the group also appeared to be deliberately missplelled, leaving the first "R" in "Infrared" absent. This is evident in the name of the discord at this time, and on signs left by members, however it is unknown whether this change was deliberate. Infrared grew quite rapidly in the first two months of 2018 by way of accepting many former members of The Peacekeepers. The Peacekeepers had become inactive as a group around when the Unification Period began. IHackedWalmart invited the remaining active Peacekeepers to join the new group (including Pandasauce, the leader of the Peacekeepers). Infrared sought vengeance on Emperium for completely destroying Inferno, and for causing Phase II to occur in the first place.

Infrared were invited by Emperium to join the United Group Embassy as an attempt at peace between their two groups. Infrared, having not forgotten the fate of Inferno, attempted to inside UGE and grief them. Retronautx managed to obtain the coordinates to the First Physical Embassy, which IHackedWalmart griefed. The members of the UGE decided to wage war upon Infrared. Infrared was at odds with other 14 groups, making the chances for victory appear slim. However, Infrared persisted. Several newly-established bases fall as a result of lapses in safety precautions. Infrared would later establish friendly relations with The Highland, after they leaked the coordinates to the Third Physical Embassy. Since the factions shared a common enemy, Highland members joined Infrared's ranks to help in the war. Infrared would also combat UGE several times at spawn, they were generally defeated by the UGE's superior pvpers. Infrared attempted to inside UGE and Emperium, but did not succeed in influencing the war in any meaningful way. Infrared HQ itself was compromised, although members of Infrared were able to get the vast majority of the valuables out of the base before its fall.

The Alpha Alliance was formed sometime in late February to rival the UGE at spawn. AA was a triple alliance between the Peacekeepers, Highland and Infrared (Team Rainbow and Team Virus would later join). Not long after the alliance was formed, the three groups scored their first victory against UGE at spawn, managing to hold spawn for a considerable amount of time. For the next month, fighting would continue at spawn, with AA trying to sabotage UGE but generally failing to do so in a meaningful way. Fighting slowly died down, and by March 2018, and the Alliance was less active. Some major battles would occur at spawn, although all were inconclusive. On March 20th 2018, on the temp map, the AA thrived, and on the first day of the tempmap they had all been fully geared. The alliance mostly stayed together, and saw roughly 15 members actively working on bases to survive the map. The alliance managed to imitate this on the other two temporary maps of spring 2018. As a result of Antvenom's video, the Sixth Incursion began. The AA decided to fight against the incursion since many incursioners were their enemies. However, only a week and a half after the incursion began the AA fell apart due to internal conflict. Only a few days after the AA fell apart, Infrared cut ties with Highland following some drama. This left Infrared and a very inactive PK against the Emperium. Many PK and Infrared bases were insided and destroyed by Emperium and Asylum. 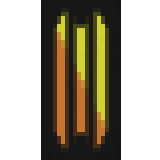 The VoPerium vs Infrared War

Roughly three months after the 6th incursion began and the fall of AA nothing of note occurred. This persisted until Retronautx griefed a VoCo spawnbase that Coltsnid was AFK at. Coltsnid was forced to log. Following this incident, Coltsnid talked with TheDark_Emperor and Ericudo. They agreed on to attack and totally dismember Infrared, starting the VoPerium vs Infrared war. In retaliation, Windowsxp4971 and WomenAreObjects griefed a VoCo spawnbase. Neither VoCo nor Emperium reacted in any substantive way. Not long later some drama went down with WAO (a member who had been loyal to Infrared for a long time), which resulted in him leaking almost every Infrared base, except for IHackedWalmart's stash. All the valuable items from every base and stash were moved to a safe location, but Infrared had lost all of their bases. Infrared also resolved differences with Highland after WAO's betrayal. Two other bases were made after this, but WindowsXP leaked them by accident. After this no further bases were made due to member activity declining massively. The war slowed down at this point. When VoCo began to renovate their spawn base at 420 911, Infrared members saw this as an opportunity to attack VoCo. Windowsxp4971, dabigbulletz638, IHackedWalmart, Retronautx and jared2013 attacked the VoCo spawn squad, and managed to win a major battle against them. They followed up on this battle by withering the base, which was promptly lavacasted by jared2013. While the battle was a victory, it strategically remained inconclusive, the war again stagnated.

The End of Phase II

After jared2013 began to argue with Retronautx about how he ran the group, jared2013 made a chat for all the active Infrared members where they would withdraw from the group, crippling Retronautx's influence over the group. Jared got WindowsXP and bigbullet to leave the group, and, the next day Retronaut disbanded Infrared. After this, Coltsnid immediately claimed victory, saying the VoPerium Alliance crushed Infrared. Many members of the group instead claim the group collapsed due to internal problems. Many of the well-known Infrared members are now in Highland, with some exceptions, most notably WindowsXP.

Over 3 months after Infrared disbanded, a new group called Iridium was made which was comprised of many ex-infrared members, Highland and more. Iridium was founded by dabigbulletz638, IHackedWalmart and Retronautx., it had around 18 members as well as some more recruits. Something noticeably lacking from the group was a base. Iridium and Highland spawnfagged, and griefed a couple of bases together. There was no conflict with the Emperium or VoCo at all. Some minor drama occured with Cydonia. Some drama occurred in the public chat between 0ffsets and WAO, where a leader sided with WAO, leading to 0ffsets getting kicked and WAO becoming a member. 0ffsets leaked an Iridium stash afterwards and WAO got the rank of council. After IHackedWalmart left Iridium, he and bigbullet revived the Peacekeepers, Retronaut decided to disband Iridium and join PK. A month later, Iridium disbanded due to inactivity and lack of enthusiasm from members. 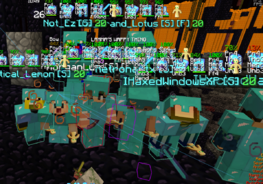 Retrieved from "https://2b2t.miraheze.org/w/index.php?title=Infrared&oldid=61721"
Categories:
Cookies help us deliver our services. By using our services, you agree to our use of cookies.