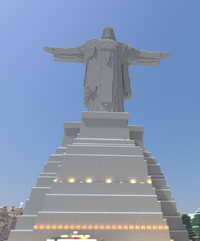 Christ the Redeemer, the most well-known build on 2b2t, at Imp Base.

Impterator's Group was a group which based at one of the most notorious locations in all of 2b2t, Imperator's Base. The group is considered to have constructed some of the most impressive builds in 2b2t history.

While not the largest, the Imp Base group was composed partly of Imperator’s friends and THEJudgeHolden’s friends. With time, other people joined the group (also thanks to several dupe glitches that allowed them to have great resources to build).

Their base, commonly known as “Imps,” is still one of the largest and most beautiful bases of 2b2t, despite being destroyed in December of 2015 and created in 2012. For several years the base was the largest ever.

It was griefed on 25th December of 2015 by jared2013, but the group already only had few people still playing. Members are still active, however, it is unknown if the actual group still lives on or was disbanded during the course of the Rusher War.