This page contains information that can be considered outdated or hasn't been checked in a while. Please either verify or update them.

The Independent Interstate Society (IIS) was once most active nether highway repair group on 2b2t, with the goal of expanding and maintaining all eight highways in a uniform, functional obsidian design, to ensure the best possible highway experience. They also construct ring roads, which connect the main highways at specific intersections.

The roads IIS builds where made with elytra flight in mind, meaning they were meant to be spacious and unobstructed (the group does not concern itself with overworld highways). Since the group's inception in the summer of 2019, its discord has grown exponentially and as of May of 2020, has over 1,500 members

IIS is not associated with SIG, the highway sub-group of The Vortex Coalition. However, IIS was founded after multiple failed attempts to work with SIG, when the leaders of IIS found SIG to be poorly organized and basically inactive[1] (see History for more details).

The group built and maintained the roads in all the 8 regular directions; portals and other obstructions on the road such as banners and random blocks are removed during routine repair runs.

Another part of the group's construction effort was focused on the ring roads, which are horizontal highways that connect all the 8 highways at specific intersections (allowing people to completely avoid the spawn region when travelling to a different axis). Some of these ring roads already existed as 1x2 tunnels, but the IIS expands them into full-blown obsidian highways, albeit slightly less wide than their main roads. The ring roads that IIS constructed are located at intervals 1,000; 2,500; 5,000; 10,000; 15,000; 20,000; 25,000; and 50,000 with the 15,000; 20,000 and 50,000 currently being worked on, as they are not yet finished. Some of these ring roads are being added to help nether renders to be done, the most notable being done by IronException.

It is debatable whether or not the 100 / 200 / 500 / 800 ring roads are part of IIS's network, but that is because the state of the nether spawn area can vary so strongly that these roads may not exist, or be rendered irrelevant for periods of time.

Obsidian is obviously the traditional block used for highways, since it is the hardest to grief, and with the many dupes in recent times, it has become available in nearly infinite quantities. The IIS has set up a network in its discord where members can request enderchest shulkers to be delivered to them by the group's core team, while it also appreciates donators with dupes of obsidian who step forward to fund the group's activities.

Members where encouraged to share screenshots of their work, but unlike other highway groups, there is not much of a focus on forcing people to provide proof of their activities; since IIS does not technically reward its builders in any way besides the honor of working on a 2b2t public infrastructure project, lying about work wouldn't have the same temptations.

IIS was a neutral organization and does not care for faction drama going on around the server; the group (which does not like to refer to itself as a "group" in the traditional 2b2t sense) does not want to take part in any ongoing wars, beefs or conflicts, but are willing to work with anyone and everyone, as long as they want to help build roads and have fun doing it. This means they interact with a lot of the spawnfags and also groups like Conquest, The Emperium, The Infinity Incursion, and VoCo ; however, IIS did not want any official "allied" or "enemy" status with any of these groups, specifically so that they can work with whoever.

The group also did not see highway maintenance as pro-newfag activity, and does not in any way restrain its members from killing new players, raiding stashes, being active in war/raiding groups as individuals, or anything else done outside of IIS activities, although it was strongly encouraged to not attack players while doing IIS work and instead try and recruit them. 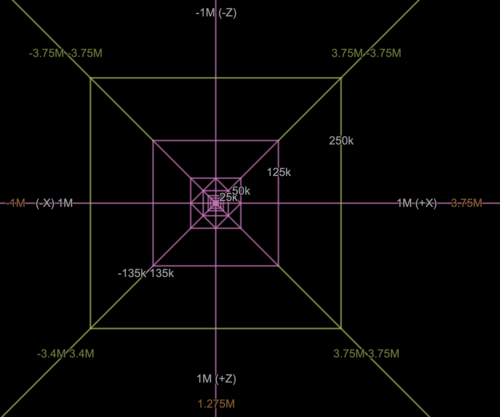 The founding members of The North East Highway Group (precursor to what would become the IIS) were TheFifthAge and Adam8067; the IIS was founded by TheFifthAge, Adam8067, CoziePanda, Eddie123 and Maxed/5K5K shortly after.

The first real activity of IIS's repair effort was just its leader building the +X -Z highway solo from near spawn to 35k, where Adam8067 then joined the effort and together (with some help) built the highway all the way to 80k.

The group's leaders initially joined SIG and tried to claim credit for work they had already completed on said highway, but since they had already completed more repairs than the SIG credit system was designed to deal with, they ran into obstacles like rankup bureaucracy and a need for recorded screenshots every 100 blocks, that seemed counterproductive[1]. Furthermore, SIG's policies on repairs did not specify whether one had to use obsidian, which led to roads looking like patchwork netherrack-cobble bridges without walls, easily destroyed by withers and even people with tnt and/or pickaxes. All of these things led to the IIS being founded as a much more loosely-managed, independent highway group.

In its first few weeks of existence, the IIS sent out repair and building crews to rework/restyle the existing disheveled highways into the IIS's specific template. Because the highways had not been properly tended to for some time, this task included the destruction of a lot of highway as well, since many of the main roads were built in mismatched styles. However, after this was done, repair and restoration on the highways became significantly easier.

During late August and the month of September 2019, the group saw a massive influx of players that necessitated large-scale reworks of the role system and a more invested obsidian delivery system. Around November and December, the group's player count stabilized right around 1800 members and has remained constant since.

On August 30th 2019, the group finished their first main milestone goal: to extend their highways to at least 20.000 in all directions. 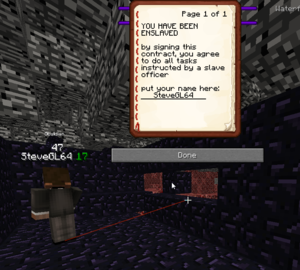 In October 2019, Rageland Renovations (also known as the Anti-IIS) was founded by Steve3 with several members from The Backstreet Boys and Point Zenith to ruin IIS highways. The group became known for using slave labor to block large sections of the -Z highway with obsidian, a tactic that was significantly more effective than breaking up the roads using withers. The IIS has since removed 100,000+ obsidian placed by Rageland, and as of December all roads were cleared and Rageland has given up trying.

Other highways have also been blocked using obsidian and marked with "road closed" map arts at various moments since IIS's founding, but there have been few incidents where these griefs were consistently rebuilt after IIS's road repairs. In November of 2019, chunk-banning was being utilized to block the highways in some places, but this was patched (in the nether) by Hause in December.

As of November 2019, the four non-diagonal nether highways all extended to at least 50.000, with the north-east diagonal highway still leading at over 250k. IIS consequently focused its efforts on reaching 50k for all roads, as well as repairing and maintaining the existing ones.

In the month of January 2020, the IIS heard some of the community's cries about the massive influx of youtubers, and so came to an agreement with the Infinity Incursion to allow them to grief everything within the first 1,000 blocks of spawn, but not including the 1,000 ring road. This included all highways and ring roads within that distance, and IIS recommended that everyone should ignore that area. This agreement came to an end on May 3rd, 2020, when the IIS announced they would once again repair the highways within the first 1,000 blocks of spawn, because of the beliefs that the blockade no longer served a purpose, and that the Infinity Incursion and its allies stepped past their boundaries and griefed past the first 1,000 blocks at spawn, causing for extra work for the IIS.

On January 30th, 2020, IIS successfully finished extending all 8 directional highways out to 50,000 blocks long. There was supposed to be a meet up at spawn later that day, but was disrupted due to griefers and spawnfags.

As of March 2020, all eight obsidian highways reach out to at least 50k nether, with the x+ highway reaching out to over one million overworld.

The IIS finished extending all 4 main highways to 125k nether, aka 1 million overworld on April 21st, 2020. This marks a major milestone in IIS as the majority of 2b2t travel is done within the first million.

As of September 2020, IIS is under new ownership, headed by Snow710. Under him IIS Kings will give suggestions on the new course of the IIS. Snow710 took over after TheFifthAge was inactive for a period of several months. From Snow710, "Fifth and I got in a argument and I removed some roles to clean up the discord, but he got mad and left completely. He gave me owner, so I have decided to make the IIS active again." The group will still focus on Highways but also put equal effort now into crystal pvp, group bases, etc.

The IIS was friendly with almost all groups. They currently have no negative relations except against Team Sexy. This relation has died as the X+ has been cleaned thoroughly since and hasn't been griefed.

In early 2020, Team Sexy began an attack on the Nether Highways via a mass-clog of the highways. The IIS was quick to counteract using withers and normal pickaxes, but Team Sexy strongly persisted. This event has ended

Retrieved from "https://2b2t.miraheze.org/w/index.php?title=Independent_Interstate_Society&oldid=50996"
Categories:
Cookies help us deliver our services. By using our services, you agree to our use of cookies.