_gigo's Temple, also known as The Japanese Temple, was a massive build created by _gigo in mid 2019. It was demolished later that year by Finstaa and some others after it was suspected that Babbaj had leaked the coordinates.

_gigo had left his first base, Alpha Site, and went to stake out a new location for a base. He now had access to the chunk dupe, and was able to acquire a large amount of wealth to start his new project. He designed some of the temple in creative first, then built it himself on the server.

One day _gigo recieved a message from Babbaj's alt, NormieSlayer, saying that he was going to nuke his temple. It is thought that Babbaj leaked coordinates thereafter, since some time later Finstaa got the coords and decided to grief it along with some friends as an event. The temple was almost complete when it was griefed, a few wall panels are still missing in its final state. 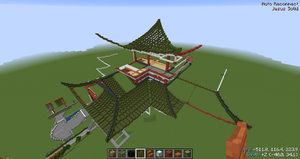 The creative world _gigo worked out the design in

Retrieved from "https://2b2t.miraheze.org/w/index.php?title=Gigo%27s_Temple&oldid=53073"
Categories:
Cookies help us deliver our services. By using our services, you agree to our use of cookies.