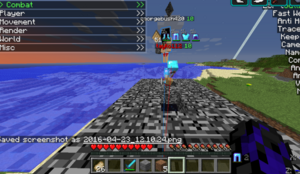 georgebush420, otherwise known as Fyrvelm or csundlof, is a friend of Hausemaster and creator of the ChatCo plugin. He's also presumed to be the current moderator after the original Hause left on July 31st, 2014.

georgebush420 is an alleged operator account on 2b2t. He logged into the server infrequently up until May of 2016, after which he was seen only a few times. He is well known for an image of him floating over an end portal encased in bedrock at The Archive.

They were also notorious for having been seen at the 'missing base' that ended up being griefed by ChromeCrusher in this link.

Retrieved from "https://2b2t.miraheze.org/w/index.php?title=Georgebush420&oldid=61815"
Categories:
Cookies help us deliver our services. By using our services, you agree to our use of cookies.