Franknificant is a newfag builder, mostly known for designing and building builds based on fictional and real-life structures. Most of his builds are available on The Archive. Frank has also been interviewed by Lunch_Katsu about his experiences on the server.[2] 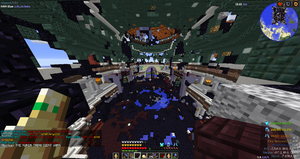 The Hagia Sophia post-grief. This shows the obsidian core maintaining the general shape of the structure.

Franknificant joined in May 2020 but remained largely inactive until September 2020. He has designed and built multiple structures on 2b, most of which were used for public spawn events like Fight Club, Nomad Games and Pitfight. Four of these structures together formed the 'Four Spawn Churches Project', a series of churches all on opposite coordinates within the spawn region.[3] Frank developed a building style where he would integrate an 'obsidian core' to the building, meaning that behind each wallm ceiling and floor a hidden obsidian skeleton would be integrated. This made the builds harder to grief while also allowing for variation in its block palette.

Early 2021 Frank was invited by BachiBachBach to take a leadership position in the new Infinity Incursion building division. Due to backlash after raiding a Guardsmen Base in the II building division he left the group after the first spawnbase: George Harbor.[4]

After participating in the grief of a SpawnMason lodge and base called Chunk Haven with Team Rocket, Todarac used the Nocom exploit to find one of Franks personal abandoned stashes.

In september 2021 Frank and Forceken started The2b2tTimes, a weekly newspaper printed as a mapart and spread all over the server. They covered different topics, such as exploits, the potential of the server updating, the drama surrounding Jakethasnake52 and BachiBachBach and their behavior around minors and the 'unwritten rules' of the server leading to multiple bans.

In june 2022 Franks Duomo Cathedral was used for a Wedding Event, as covered by Fit.[6]

Retrieved from "https://2b2t.miraheze.org/w/index.php?title=Franknificant&oldid=65702"
Categories:
Cookies help us deliver our services. By using our services, you agree to our use of cookies.