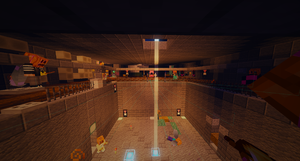 Fight Club is a 2b2t monthly event that occurs at the final Friday of each month. The idea for Fight Club is to have unarmed fights close to spawn, 1 day per month, for the reward of PVP kits (which give new players a chance to get end game loot without any need to buy it from a shop or grind for it), with multiple locations and participant filtering. The whole concept of Fight Club is after the movie "Fight Club" from 1999.

The Fight Club concept was founded by Forceken, and the first event of Fight Club took place in 2017. The concept was having unarmed fights for PVP kits. Unfortunately, it didn't last long, as it was held at 0,0 with no advertisement at all. After this, Forceken got bored with those Fight Clubs and wanted to make something better, with more thought behind it and something that would last longer. Around the beginning of June 2020, Forceken created a map art of Fight Club to advertise the event. The first event that resembles what Fight Club is today took place in June 2020.

On July 25, FitMC uploaded a video about Fight Club, which made the Club very popular and attracted many new players. It has even become more popular after BarrenDome uploaded his own video about the Club (and a lot of other smaller 2b2t YouTubers did the same).

Fight Club has managed to host the largest gatherings in 2b2t history (with over 52 people at one site), and the event has also spread to other anarchy servers. The average player count at these events is normally around 30 on 2b2t.

There are some griefing attempts at Fight Club; because Forceken publicly posts the first coords to the Fight Club it mostly gets griefed in about 20 minutes, but in the second round, when it's private only for fighters, the arenas last for a much longer time, sometimes remaining untouched long after the original fights.

On October 3, the final weekly fight club event was held, featuring an arena in the end. Forceken later revealed that fight club would be moving to a monthly format from that point forward.

On May 31, 2021, following three weeks of building, an event was held for the fifth anniversary of the Rusher Invasion, at X:5130 Z:7680, with a build containing statues of Fit and Rusher, and a recreation of the castle where their duel occurred. Fighting following the release of the coordinates lasted for three hours. 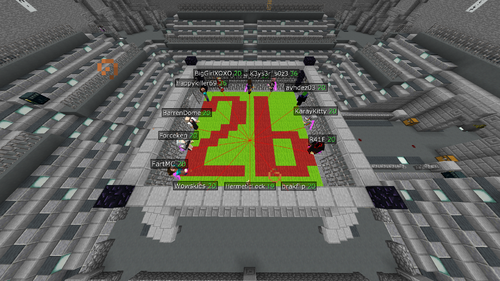 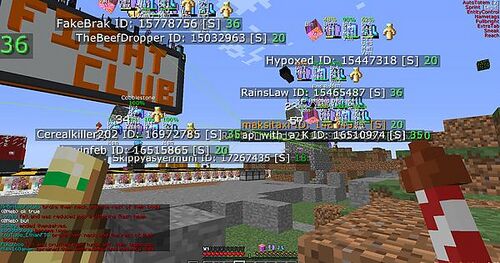 Screenshot of the Fight Club getting griefed.

Retrieved from "https://2b2t.miraheze.org/w/index.php?title=Fight_Club&oldid=56584"
Categories:
Cookies help us deliver our services. By using our services, you agree to our use of cookies.