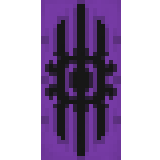 Fifth Incursion Banner
The Fifth Incursion was originally started by Slappnbadkids although he quickly lost interest. It was publicly announced by jared2013 on November 23, 2016, on the 2b2t subreddit. The Fifth Incursion was a coalition of The 4th Reich, stragglers of the 4th Incursion, and some of the remaining oldfags and midfags that remained on the server despite the chaos during the The Rusher War.The initial goals for the incursion was to make an obsidian wall around spawn, level spawn, remove lava casts and all water within the 400x400 radius, and build an obsidian town in order to contain spawnfags in the region, now that the 1.11 update made escaping spawn easier. It was a balancing act. Later goals were added to make advances against The Vortex Coalition wherever possible and to hunt for the numerous dupe stashes that came about from the 11/11 Dupe. However, as the Incursion went on, it was turning out to be more of a meme than an actual incursion. The fact that most people didn't take the incursion too seriously makes this a Meme Incursion if anything on the subreddit.

There has been some action throughout the "Incursion" however minimal. There have been the presence of numerous individuals (mostly new players looking to PvP) armed with enchanted weapons and in enchanted armor, however combat has been minimal. The incursion was relatively quiet, with most resources being put toward containment rather than combat.

There was progress in constructing the obsidian containment wall, however it had been slowed due to interference from Team Aurora and concerns about waves of French newfags thanks to AgentGB and his video which advertised the server. Eventually, construction was never completed due to the massive amounts of withers spawned on the wall by several players.

There has been a brief command structure problem, with jared2013's stash supposedly being discovered and griefed. Enraged, he took another hiatus. DemonElite119 took command of tactical operations to keep the Fifth Incursion operational and in line with its goals, while Tim_Mcnukepants focused efforts on building the spawn base of the Fifth Incursion.

The 5th Incursion eventually failed and officially ended on December 11th, 2016. The reason for its failure was that jared2013 got bored of the Incursion, the spawn bombing did not happen because the group behind the bombing has been disbanded and the wall project has failed after the walls got withered by various players. The only thing that was a slight success in the entire incursion was an obsidian base in which the 4th Reich built (supposed to be the obsidian town mentioned earlier however remained a forward operations base), however the location of this base was leaked and griefed heavily. Overall, the Incursion ended up a meme and had almost become a real incursion if AgentGB made a series on 2b2t if the community hadn't completely spammed the shit out of him with hate comments.

What has often been overlooked was DemonElite119's betrayal of the very incursion he sought to keep afloat. As Tim_McNukepants went rogue and was disregarding any tactical plans to properly quarantine spawn and was working essentially on his own with random newfags that he invited unilaterally alongside his 4th Reich companions, DemonElite119 eventually leaked the location of the Fifth Incursion Forward Operating Base to NedaT and her companions, as well as to Drewbookman. Drewbookman would go on to spam the coordinates to the base, while NedaT rallied her forces, and a third group also appeared looking to grief the base. DemonElite119 self admittedly stuck around and pretended to fight, while planting withers within the base and attempting to protect a couple of individuals he still saw to be loyal companions, such as _Henry_ and Sun_Wukon. His betrayal was suspected but never proven until DemonElite119 himself admitted to leaking the coordinates to the base.

Retrieved from "https://2b2t.miraheze.org/w/index.php?title=Fifth_Incursion&oldid=61696"
Categories:
Cookies help us deliver our services. By using our services, you agree to our use of cookies.