Fenrir was a base built by the Nova base players when 2b2t came back online. The project took months to complete, but when it was finished, it was an eye-catching base (no joke). During the time Fenrir was built/being built, 2b2t was a place that "was a Peaceful time and no major events." according to ArchQuantum's Imgur Post. Other Then that, not much is know about Fenrir. From a few posts by Sato86 on Facepunch, it seems like the base was planned to be abandoned just months after it was built. 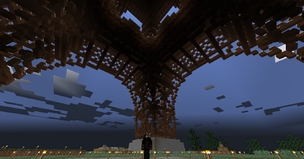