Facepunch Republic, also known as Peoples' Republic of Facepunch, or simply Facepunch or the Republic, was a large group on 2b2t players who joined 2b2t from the now-defunct forum facepunch.com beginning on April 27, 2011. These Facepunchers came to 2b2t to play and create bases where their forum members could build and bring order amongst the server's anarchy, and, at their height, they contained members in the hundreds. The group went to war against the pre-existing 4channer population just one day after their formation. chezhead, who created the famous forum thread, led the group for several months until Phagocytic assumed power into 2012, before what was left of the Republic collapsed in June that year, falling to the griefers.

Following the fall of the Republic, many Facepunchers went on to have prominent roles in the following years, most notably the Facepunch base Hitlerwood, which merged with the Black Flag Group to create Valkyria in 2013. In November 2019, chezhead, the original founder of the Facepunch Republic, returned to create the New Facepunch Republic – a revival faction committed to secrecy, nonviolence, and good vibes. 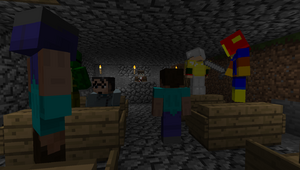 The future founder of the Facepunch Republic, chezhead, joined 2b2t on April 26, 2011. He found a large griefed castle near Spawn with extensive mines below it, which he explored. He was joined by his friends Mattyyy, a Facepuncher, and Coolity, who he made a base with there in the mines. On April 27, 2011, at 4:57 PM UTC, chezhead created his now-famous thread on the Facepunch forums, titled "Upon the Shoulders of Giants: An Adventure in 2b2t", officially beginning the Facepunch Republic. Over the next several days, over 100 players would apply for membership. The original base transformed into a "bustling stairwell" with many rooms and mines.[1][2]

Later on April 27, the Facepunchers decided to move out from their base, due to lack of space and proximity from Spawn, and traveled in search of a new base. They found a ruined castle, which they repaired and inhabited to become their second base. A rules and jobs system was created with farmers, resource collectors, and defenders, and the base included a treasure hall, meeting hall, tower, and guard post. These events marked the first known group bases on 2b2t. The ability to form a society was cited as a result of the culture and closeness of the Facepunchers, unlike what much of the original 2b2t population, mostly 4channers, was used to.[1][2][3]

Later on April 27, after amassing around 20 members, 4channer luke2thebun, using his "mweorz" alt account, arrived at Camp Facepunch with fly hacks, blowing up the base with TNT. The members scattered, most of them killed, including chezhead, who died in an ensuing fire. The attack, known as Greyskull's Stand, marked the beginning of the Facepunch War. chezhead and much of the Republic's morale were reduced after the event, as they found it unfair to be going against hackers. mweorz camped at the base, killing any arriving Facepunchers.[2]

Their initiative to bring order failed badly as their actions were seen as an insult to the whole server, beginning a hunt for Facepunchers on the server. This led to a server-wide conflict known as the Facepunch War, which led to the group's inevitable demise. After chezhead left 2b2t and gave up hope, the remaining Facepunchers failed to keep the group together and eventually disbanded in February of 2012. Their forum was still essential to 2b2t as a media and a sort of memory book of the server.

One of Facepunch's main and most notable spawn bases was 2k2k, located at approximately X:-2000 Z:-2000. Built by Facepunchers and led by Phagocytic, who took control after chezhead's departure and initial disband of the Republic, this was their last-ditch effort to fend off against the attacking 4channers. Since their base was close to spawn, it was griefed multiple times, although this didn't stop the Facepunchers from repairing it for over a month. Eventually, the group began to decline once again as more and more Facepunchers gave up on repairing 2k2k. They either went to live somewhere else or left the server. 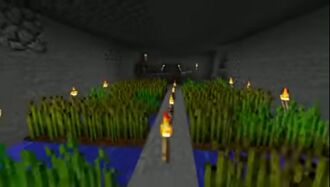 A farm at Fort Creationism Corner, a Facepunch base
The Facepunch Republic collapsed in June of 2012. 2k2k was covered in a giant lavacast before being griefed down to bedrock. The last Facepunch thread was closed on June 7, 2015.

Despite the Republic being disbanded and several Facepunchers leaving after 2k2k, there were still some who remained. These Facepunchers either fused into new groups, went solo, or never advertised their Facepunch origin and secretly made new bases. The most notable group of Facepunchers still remaining after the Republic's fall was the group started by Coldwave, in which he hoped to create a new republic. He founded Hitlerwood which later fused with Anatolia (aka the Black Flag Group) to create Valkyria. Valkyria could be considered the Facepunch Republic 2.0 due to their Facepunch ancestry. Knightvista created the last Facepunch base, Fort Avril, which was griefed.

Following an influx of players coming from the Facepunch forums in April 2011, luke2thebun griefed Camp Facepunch, retroactively named Greyskull's last stand, on April 28th, 2011, effectively beginning the loose ties between the groups. Chezhead later declares war after denial, mainly due to his advisors suggesting it. Many 4channers and individuals begin to attack Facepunch Bases.[4] Spies in the forums, along with a majority of 4channer's using Cheat Clients, led the Facepunchers into a decay as many of their bases were raided and griefed, since most were very close to spawn.

Despite a failure to achieve peace and stability in 2012 and the Facepunch forums shutting down, in November 2019, chezhead returned to the server to revive the group and establish some outposts, starting the New Facepunch Republic. In the beginning, the group was controlled by 0Neb, who was Armorsmith's advisor at the time. They both intended to use chezhead for their manipulative plan to "take over" other factions. This resulted in Sato86's involvement, who managed to get chezhead to take back the Discord server and get rid of both Armorsmith and 0Neb.

There is a video with screenshots of many Facepunch bases here.

Retrieved from "https://2b2t.miraheze.org/w/index.php?title=Facepunch_Republic&oldid=62711"
Categories:
Cookies help us deliver our services. By using our services, you agree to our use of cookies.