Empire's Edge was an Emperium base created in late 2017 to house members of the growing group. It was the largest base in the group's history, with 18 members in total. It lasted for seven months until it was leaked and self-griefed in May 2018.

Empire's Edge was founded in October or November 2017 to house newly semi-trusted players of the growing group. It originally housed around five members, who built the foundations of the base. After a few months, the base grew to around 15 members, and it rose in quality and design. Many unique builds by players with their own forms of creativity shaped the base. There was notably a lack of a theme between the various builds. With a total of 18 invited players, the base is the largest in the history of The Emperium. It hit its peak around March 2018, experiencing ten players online and building at once.

On May 17, 2018, the base's coordinates were leaked to the 2b2t subreddit. Members of the Emperium quickly got online to evacuate the equipment and duped items as fast as possible. Several other members guarded the highway to the base itself, holding off anyone who may have had the intention of attacking the base before they destroyed the base themselves in a self-grief. 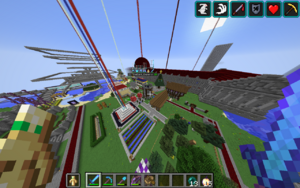 The main area of the base was a village called the "Emperial Village", built in front of the massive capitol building. Just opposite from the capitol building was MortAmos' Manor, an incompleted mansion begun by MortAmos on November 25, 2017. It was a three-story mansion with a five-story tower. The build was intially abandoned following the completion of the front due to in-real-life reasons. A drama started when Slimestoner stated MortAmos was too inactive, leading into a heated argument where MortAmos eventually decided to work on the manor again. Not long after, the Sixth Incursion was declared, and MortAmos traveled to Spawn to participate. After the disbandment of the incursion, MortAmos never returned to the base. SlimeStoner, one of the most active members, built a redstone area on some islands containing farms, as well as a ship. Floating islands were built by diagoporotin. A recreation of Arrowhead, the first Emperium base, was built by Ericudo, smaller than the original. It took five hours to complete the shell of the build. The base also contained a large gold farm and a large stone statue.[1]

Retrieved from "https://2b2t.miraheze.org/w/index.php?title=Empire%27s_Edge&oldid=60742"
Categories:
Cookies help us deliver our services. By using our services, you agree to our use of cookies.