The Elysium is a group founded and led by Carlll and Lil_Remains66 (for 2 months). The group was started when Carlll_ was a new player who really didn't know much about 2b2t, but over time grew as his social circle expanded and gained more and more skill. The group is intentionally kept small, while being good terms with most major groups. There isn't a hierarchy system, although a council of members exists, which Carlll_ takes more seriously than other members. Over 100,000 messages have been sent in the server, averaging around a message every 5 minutes for an entire year. CirocDrip has the record for the most times banned from the server at 71 (as of 8/12/2020). The group also had a large presence on another anarchy server, 9b9t, in mid-2019.

Elysium I was founded on June 22nd, 2019, about 3 months after Carlll_ joined the server. Him and a few other players traveled from spawn down the Z+ highway until they got bored, then settled down at about 4.5 million blocks away from spawn. Warrior_AZ was the first person to reach the location and 4 other players arrived over the next few days. As time went on players went inactive and new ones were added. The base slowly expanded and builds were made. However the base didn't have much true significance until around October of 2019.

A side render of Elysium I

One of the base members, Linkiie, joked about making the entire bible in Minecraft books. Carlll_ took him up and actually created the entire Bible using bookbot. After logging off, Redstoner___ logged on to see the creation. However after opening the chest containing the books he realized the server didn't respond for 10 seconds. He tried opening the chest multiple times, finding the same result, before the server crashed. The server crashed around 10 times that day as other people checked out the Bible and its capabilities in shock. The next day Hausemaster implemented a fix that resolved the crashing problem. This however caused Carlll_ to get book banned and the base realized book banning had returned. After this info was passed to Househousehouse1 and Redstoner___; the Book Club was founded. The group was created with the idea of book banning as many players as possible. Elysium however was not directly involved in Book Club and the base went on for another month.

In the middle of December 2019, it was realized that around 15 players who had map walls gained access to an entire map of the base. It was decided that the base would be griefed (Video) and on December 12th, 2019, Lil_Remains66 and MFatC griefed the base before other players could reach it.

Later that month it was decided another base would be created. After adding a few more members, Elysium II was founded in an ice spikes biome even further away than Elysium I on December 21st, 2019. At around the same time Carlll_ announced he was taking a break from 2b2t. It was until around April 2020 that he would return. During that time the server remained alive and base activity continued, however not much progress was made. Lil_Remains66 took over as leader for the time being and the server remained alive. The bases distance also did not help activity as it took 4 days worth of travel to reach the base. At the end of it's life, the base had a short boost in activity led by Carlll_ and major improvements were made to base infrastructure and the "main build" was finished in a creative server. This ended up never being added in any capacity.

On July 9th, the base was griefed by SpeedDemon0 due to a coordinate leak by MFatC in hopes to revive the group and improve the next base (which succeed). By pure luck a world download was taken the day before the grief, so a proper render could be made. Also by chance, Carlll_ met Noah3j at the base stash who happened to have received the coordinates and was exploring the ruins. 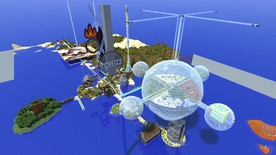 Another Render of Elysium I

Retrieved from "https://2b2t.miraheze.org/w/index.php?title=Elysium&oldid=50481"
Categories:
Cookies help us deliver our services. By using our services, you agree to our use of cookies.