After the controversial end of the Seventh Incursion and the drama surrounding it, the community had begun to grow tired of Incursions, with expectations for the next Incursion not to happen for a significant amount of time. However, during the sudden revival of Minecraft and the YouTube algorithm promoting Minecraft content (including 2b2t), the queue started to increase with drama quickly ensuing that an 8th Incursion needed to begin. 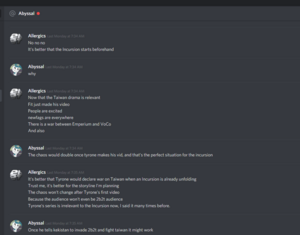 Conversation of jared2013 and Armorsmith on Discord. Armorsmith proposes to stage an "8th Incursion" to boost the server on YouTube.

In July of 2019, Armorsmith wanted to start a new Incursion in order to manipulate other groups into creating a large water cube at Spawn. The excuse used for the Incursion was the growing popularity of the server in Taiwan. He shared the idea the with jared2013, who became the public leader and owner of the Incursion's Discord server. The entire Incursion was a scheme from the beginning. They initially planned to use this Incursion to boost their YouTube channels, and the new Gaming series with Big Man Tyrone which jared2013 was a part of. They called their Incursion the "8th Incursion" and had a list of players and groups to recruit. Nobody in the Incursion knew of Armorsmith's involvement. The Incursion blew up some of the lava casts within the inner Spawn and created the initial design for a water cube made out of source blocks. At some point, a plan to renew the connections between jared2013 and TheCampingRusher was proposed, to boost moral and to provide excitement to incursioneers. Eventually, jared2013 slowly begun to lose interest in the 8th Incursion and grew tired of Armorsmith, who later leaked the scheme to the public through a YouTube video and an imgur gallery, causing some players to depart from the Incursion. The Incursion failed, but a bunch of useless water still remained at the 0,0 area. After the failure of the 8th Incursion, a player named BachiBachBach receieved full control over its Discord server (which was later deleted by jared2013) and restored the moral of its members. He used the 8th Incursion as the foundation for a new group, which would later become the Infinity Incursion.

The 8th Incursion is considered to be a disaster and one of the greatest single failures in the server's history, particularly because of the progress it made on the "water cube". While the entire project wasn't successful, the left-overs of the water cube were present in the form of a layer of water source blocks above bedrock. This water prevented normal Crystal PvP fights on the bedrock level at Spawn and was a nuisance to new and old players alike. In September 2020 this layer of water was eventually replaced with a proper water cube made of water source blocks that extends almost to build limit by the Infinity Incursion.

Retrieved from "https://2b2t.miraheze.org/w/index.php?title=Eighth_Incursion&oldid=52710"
Categories:
Cookies help us deliver our services. By using our services, you agree to our use of cookies.