DocSmurf is an oldfag who joined in late June 2013 from the 2b2t IGN video, which released on June 20, 2013, and brought thousands of players according to estimates. DocSmurf was one of the few of those new players who stayed, as many were killed and quit due to the resultant Second Incursion. He escaped Spawn before the bulk of the Incursion began, traveling the then underdeveloped highways and setting up a temp base after exiting around 68k -X Nether. He was invited to the Kool Kids Klub in late 2014. He was one of two builders of the megabase Niflheim,[1] and one of the main builders of Yggdrasil. He was a member of the 4th Incursion and Team Veteran during the Rusher War in June 2016, and later went on to become a member of the X+ Diggers.

"This server has never been for the faint of heart. It has nothing to do with its age, the state of its spawn or lack of moderation. It has everything to do with the type of people here. The ones that keep coming back. We would like to be left alone, and what little company we do find, we tend to find in people as strange as us. This server is no place for youtubers looking to make a quick buck. The ones that have featured this place on videos, have done their audience a disservice. I wouldn’t wish this place on anybody. To make it perfectly clear, there is no war. There is no win condition.. It has been and always will be a matter of time. Those who do not belong here will eventually fade away and forget this place ever existed. Those who stay will have always belonged here and they will never truly leave"
―DocSmurf on the Rusher Invasion[2] 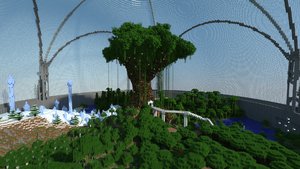 Yggdrasil was founded in 2015 near the site of a guardian temple. The location did not originally have any major plans beyond the initial project of a fully automated farm. The idea for the tree itself was put forward several months later, after Sicknessman and Daladev joined DocSmurf and Sugaha. As a consequence of a lightning event, the glass dome and inside biomes were presented as an addition. The dome contains over 140,000 glass blocks, that, due to the lack of a dupe and lack of wealth in items, were smelted by hand.

During a version update, as believed by the builders, the farm chunks lost their temple flag. The location has not spawned a single guardian since. During this same version update, several other guardian farms partially regenerated instead of losing the ability to spawn. 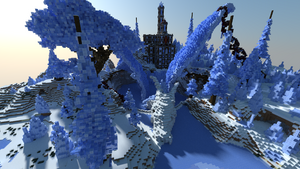 Niflheim was founded in late 2018 and was built by Sicknessman and DocSmurf. The build continues their motif of Norse mythology. The base was constructed over the course of approximately 16 months, using mostly duped items obtained through the short-lived Crafting Dupe of July 2017. The area has minor terraforming and sits next to a village. Its creation was expedited by several hacked client features like printer and Schematica integration from Baritone. The base itself consists of a large ice dragon centerpiece, multi-story castle with full interactive lighting, several side tunnels, custom-designed ice trees, and two large redstone machines, an automatic dark oak farm and an automatic ice farm.

The base's location was leaked by Dipper Nation in late 2019; the exact method of coordinate obtainment is not known, however. It is suspected that some type of terrain exploitation was used on the numerous ice spikes.

Retrieved from "https://2b2t.miraheze.org/w/index.php?title=DocSmurf&oldid=54107#Yggdrasil"
Categories:
Cookies help us deliver our services. By using our services, you agree to our use of cookies.