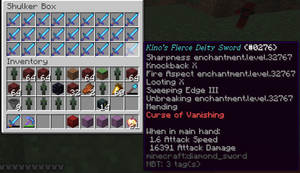 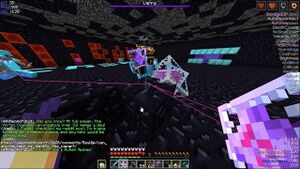 Combat in 2b2t is one of the main ways of playing in the server, and has evolved largely over the years due to minecraft's updates. The metas have been changing among the years and in the present time is one of the most unique pvp methods in all of minecraft due to the willingness of the players to seek and have an advantage over others, while many people may be saying that it is easy to participate in as it's mostly engaged with using Cheat Clients, it's far more complex and difficult to be able to be competent between other people that are more experienced. Lastly, it has gained a big amount of hate due to many spawnfags limiting their playstyle to only engaging in combat.

There have been many different Combat Metas used by players on 2b2t.

End Crystals became craftable with the introduction of Minecraft version 1.9 and when 2b2t was updated, this meta would become the mainstream way to PvP. This meta was similar to bed bombing, however it could also be used in the overworld. There have been various metas in the crystal PvP playstyle, which have evolved over the years. The current meta started after the addition of totems, which made crystals far less dangerous for all parties to use. Example of crystal pvp.

Bow Spamming was a method of using a bow to "spam" arrows at an enemy by releasing the arrow before it was fully nocked. This meta was popular during the Alpha version and stayed that way as cheat clients with a "Bow Spam" module became more and more common. It is now mostly used as a "get off me" move in Crystal PvP.

Swords were the most common type of weapon used by players on 2b2t for the majority of its lifespan. Beginning in 2010 during the Alpha version of Minecraft, players wielded Swords to fight other players. "Kill Aura" was a module that all widely used cheat clients had when they became a need on the server to have a fair fight on the server. Swords where an integral part of the meta up until the addition of totems, which made crystal combat far more viable.

Potions combined with Sword PvP was another popular meta used by players when brewing was added in the Beta version of Minecraft. Players soon learned how to stack potions and potions could be spammed. Arrows of weakness where used in 2018 to make opponents unable to punch crystals.

Superweapons refer to the swords with the Sharpness enchantment level 32,767 created during the second backdoor in 2015, by ITristan and Pyrobyte. Hausemaster attempted to patch these superweapons, however many survived from being stashed in unloaded chunks. The superweapons reemerged in 2017 after being duped by Kinorana, but were quickly patched. In 2018, AlphaComputer found a method to use superweapons without them being reverted by placing a shulker box on top of a hopper and placing the sword in your hotbar with Kill Aura enabled. Common modules for this meta were; "Auto32K" which automated the process of using a hopper to dispense a 32K Sword, "Anti32K" (first developed by John200410) which was a nuker module that targeted hoppers within a specific radius. This meta was fully patched by Hausemaster in December of 2019. Here is an example of such combat.

Beds were used as a type of suicide bombing by placing a bed in the nether and right-clicking it as it would cause a fatal explosion to any nearby, unsuspecting players. Here are two examples: 1 and 2.

Retrieved from "https://2b2t.miraheze.org/w/index.php?title=Combat&oldid=51439"
Category:
Cookies help us deliver our services. By using our services, you agree to our use of cookies.