Not to be confused with chris_leighton, an alternate account of popbob

chrisleighton was an oldfag and server regular that played from 2011 to mid-2012. He was known to be quite a sadistic player to the general community, through his claims to be 'king' of 2b2t and griefs. He created a lava spawn trap at (0,0), which instantly killed respawning and new players. 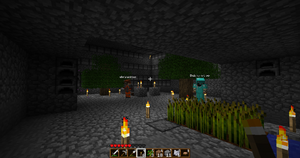 Chris at what's presumed to be a base by the Judge's group. Courtesy of Sato.

Chrisleighton was known for lava-trapping (0,0) and is thought to have "begun" the tradition of spawn killing. He was also on record to have dug early parts of the +X Axis Highway.

Chrisleighton was infamous for spamming the chat with this message: "CHRISLEIGHTON IS THE KING OF 2B2T! U MAD NIGGERS! U MAD NEWFAGS!". He spammed it so widely that most just accepted it to stop him from spamming it. The /ignore command was not present during this time, so there was no way to prevent his chat spamming apart from affirming his view.

Most of his base-mates and other 2b2t players tolerated him, until one day when x0XP had become sick of his ego and presence as 'king' of 2b2t. x0XP spoke to chris's real-life friend SnackyNorph and was able to get chris's mobile phone number. x0XP later used this to dox him and had SionThePhion call chris as a salesman for Air Conditioning units. This caused chris to quit playing on 2b2t in response for good.

Retrieved from "https://2b2t.miraheze.org/w/index.php?title=Chrisleighton&oldid=60298"
Categories:
Cookies help us deliver our services. By using our services, you agree to our use of cookies.