This is the stable version, checked on 18 May 2021. 6 pending changes await review.
Jump to navigation Jump to search

A Minecraft client, often known as a hacked client, cheat client, or utility mod, is a modification to the game which offer modules, also known as cheats or hacks. These features are not in the vanilla form, or default form, of Minecraft. No clients are affiliated with Mojang, similar to most mods. As clients can give players an unfair advantage, the usage of them is against the rules of most servers and will get users banned. On anarchy servers like 2b2t, however, using clients has been normalized, as most players use them.

Excluding new players, it is rare to find players who do not use clients, as they're needed for automating travel, giving advantages in PvP, and generally improving quality of life, such as with Search or NoRender, which patches lag and priority bans (which other players can do to you if you aren't careful).

Many players used vanilla until after TheCampingRusher brought an influx of players to the server, causing the number of players using a client to gradually increase over time. Despite implicitly allowing cheating, 2b2t patches many cheats such as extremely fast movement hacks, to reduce lag on the server, but also patches vanilla things such as Shulker box data, while making vanilla Elytra flying and vanilla fishing less effective than normal, which are controversial topics on the server.

This section will discuss most of the used clients on 2b2t and rank them based on their usage by the common player. Most of these are offered by the client's own personal site.

These are the clients that are generally most trusted by the 2b2t community. 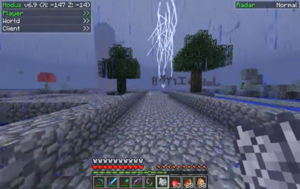 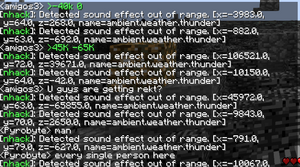 Other clients can be found on the 2b2t Media Archive here.

Do not, under any circumstances, open any links, let alone client download links, that were posted by someone in the 2b2t server chat, or in unaffiliated Discord servers.

Retrieved from "https://2b2t.miraheze.org/w/index.php?title=Cheat_Clients&oldid=55158"
Categories:
Cookies help us deliver our services. By using our services, you agree to our use of cookies.