COVID-2147, also controversially referred to as DonFuer 18, was a SpawnMason group base founded on March 9, 2020, as a place for members to build during the quarantine of the COVID-19 pandemic. The main base area consisted of a rustic city atop a terraced landscape, built by D_loaded, which also served as the 18th DonFuerian base according to D_loaded, though it is not recognized as such by the other base members. It had a total of 23 members throughout its almost three-month lifespan until its grief on May 30, 2020, which resulted in drama among the base members. 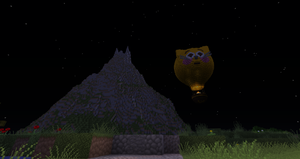 "The name was changed by D_loaded without consulting the members to Don Fuer 18 to make it seem like he was doing all the work. In reality, he was at a group base during the end of school and many of us were fairly busy at the time. He took this as it was his to do whatever he wanted with when in reality many of us had started to return to build. The original name was Covid-2147, we even discussed changing it to CovFuer and D_loaded agreed to that, but I'm guessing he wanted more credit for his 15 minutes of fame."
―NickHasCancer[1]

Retrieved from "https://2b2t.miraheze.org/w/index.php?title=COVID-2147&oldid=56750"
Categories:
Cookies help us deliver our services. By using our services, you agree to our use of cookies.