The Brownmen are a group of exploiters and lagfags who have broken the server fairly consistently since November of 2019. Their exact number of bases, stashes and members are unknown.

They sometimes host public projects/events that everyone in 2b2t community is welcome to join and contribute.

The Book Club was the precursor to the Brownmen. It was founded by 2b2t_Veteran, Gsmack, househousehouse1, Steve3, and HAUSEVULT to record lists of players they had bookbanned. Shortly after its founding, the group went public and turned into a coordinated mass book-banning operation. Over the next few days, hundreds of players were banned, many from an automatic book-banning trap at 0 0 nether known as the "gas chamber". On October 30th, 2019, book-banning was patched by disabling the ability to view the content of shulker boxes in inventory tooltips, which also patched .peek and shulker preview mods. The next day, 15 members of the Book Club Discord had their priority queue removed and were banned from donate.2b2t.org. Some of the prio-banned players had no involvement in lagging the server or book-banning players, and some players who were involved in the lagging didn't get prio-banned. This led many to believe admins of 2b2t were inside the Book Club Discord since only those who had their Discord name set to their in-game name were prio-banned. A riot started, and information about the true admins of 2b2t was posted to the Discord. 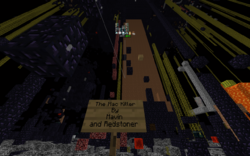 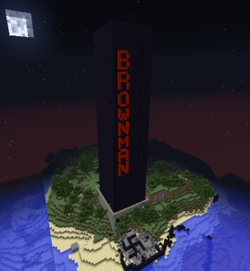 A giant lag machine tower for Fight Club built by the Brownmen, August 2020 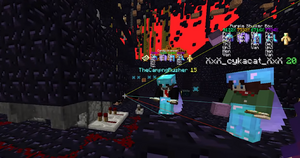 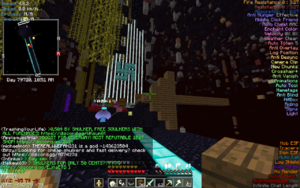 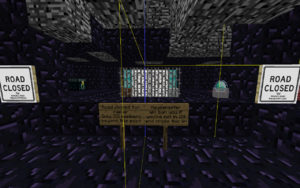 Disclaimer for people before they get chunk banned, December 2019

This gave birth to No Server November, a parody of No Nut November, where Book Club members had to crash the server every day of November. The leader of the group househousehouse1 designed a lag machine that involved large amounts of Redstone dust platforms and observer clocks powering them. This was because of their previous knowledge that Redstone dust is extremely laggy in large amounts in all versions of Minecraft. This machine could take the TPS to less than 0.6 with enough layers. Hausemaster disabled redstone clocks in order to combat this lag machine. which made the observers automatically break when you activated the machine. The other design for a lag machine they used involved large amounts of sand. They used a method to keep the sand as a floating falling block. This lag machine was also extremely powerful. It was able to take the TPS to less than 2 with a bit more than 5000 floating sand.

Other than lag machines, they also used an exploit that they call "Snowcones" to crash the server or mass kick players in order to skip the queue. This was done by using a private utility client that was capable of sending packets to crash the server. They skipped the normal queue on already banned accounts so they can build lag machines with those accounts again. They constantly crashed the server during peak hours to the point where it was completely unplayable. They also used chunk-bans in the nether and chunk-banned many people. Because of chunkbans and the number of times the server had been crashing, people would become frustrated and less active, which reduced the normal queue to a low of 85 and the priority queue was instant for months. Fewer people bought priority queue, which hurt Hausemaster's wallet, so the operation was considered a success. The Brownmen lead the NSN operation from behind the scenes and most members came from there. 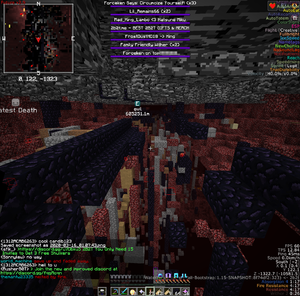 Highway being destroyed by The Quarantine, March 2020

The Quarantine was not a "group", but rather a coordinated effort towards accomplishing certain goals relating to 2b2t's spawn, most chiefly a total quarantine of at least a 250 block nether radius from 0,0 (2000 overworld blocks), as well as a number of other events and projects intended to hinder the easy escape of newfaggots. The Quarantine were able to destroy all roadways within the radius in mere days and kept the roads down for a few weeks, other then that the group wasn't too notable and was eventually moved to Rageland Renovations after the Discord started to die. 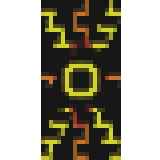 After months of rising queue times due to COVID-19 quarantine hype, the Brownmen sought a more efficient way of removing new players from the server. Hausemaster had patched the chunk-bans used during the Book Club and No Server November, but left furnace chunk-bans unpatched, assuming that they were too cumbersome to be constructed by any sane person. April 7th changed that. Out of curiosity and due to a new dupe that they found, they started duping furnaces and Redstoner went to a testing site and constructed a furnace chunk ban. It took many days but he thought it could be industrially produced with a large number of people and some smart organization. That day he made a Discord server called "the bakery" with Steve3 and other members of the Brownmen, they headed to ZiggyBase to build another chunk ban (this is where they built chunkbans during NSN and posted bait on Reddit). With a scaled up amount of labor, the chunk ban was completed in a matter of hours. They would casually lead new players in there to ban, including streamer Jakethasnake52 who went on a full rage after being banned.

Redstoner spent the next day setting up a supply chain of furnaces to be duped, stored and flown in. This would be especially difficult as the bakery project consumed nearly 20 shulker boxes of furnaces per hour. These needed to be duped and stored within close range of the site to be quickly accessed after a restart.

With the supply chain and site architecture sorted, on April 8th "The Bakery" Discord went public. Hundreds of people joined in the first two days, there was a 'bake' list made for members who all put the IGN of the people they chunk ban. Within a few days the ban list reached into the hundreds causing a huge panic on Reddit and around 2b2t Discord servers. A rather trivial but effective addition was the Holocoaster created by Gsmack and HAUSEVULT. This contraption carted players off from spawn, along the nether highway and automatically trapped them in the portal, and banned them (similar to the gas chambers from The Book Club days). Hausemaster was removing chunk bans every 24 hours on every restart. However, because of the aforementioned efficiency, chunk-bans could be rebuilt in as little as 30 minutes. Furnace shulkers piled up in the delivery section next to the chunk ban with people constantly flying in and out moving them as fast as they were being consumed. There was up to 40 people placing furnaces at a single time, but when PVPers and Emperium members arrived to grief it a section of the builders would fight them off utilizing the bow kick exploit, this was to ensure they get chunk banned after attacking since they can't escape their logout spot in time. FitMC made a surprise video on the 11th of April showing himself getting chunk banned and warning people not to go to ZiggyBase. Chunkbanning moved to 0,0 Overworld on April 17 in an attempt to ban players on login. Chunkbanning as a whole was patched on April 20.

After a successful event the previous year, the Brownmen decided to lag the server in November of 2020 as well and make NSN a yearly tradition. This NSN was quite different from the previous year. The whole project was much more organized and had a large public Discord server. The Brownmen were more prepared this year, as they had a design for a lag machine and a queue skip. The initial lag machine the group used (hhh1's design) stopped working on the first day as Hausemaster disabled redstone clocks once again. In the middle of November, Redstoner2b2t managed to find a new design for a lag machine involving a massive amount of slime blocks, and called this machine the EMP machine. This allowed them to effectively /stop the server as it crashed in 1 tick. In the middle of November Hause patched their queue skip, but they managed to come with a new one at the end of November. They also used boats to kick players from the server, with more than 500 "boat-bans" recorded. At one point, they built a lag machine near a Fight Club event, which triggered Hause's auto priority ban plugin. Hausemaster's PayPal account was spammed with complaints, which led to the account being temporarily disabled, and no one was able to purchase priority queue for a couple of days. At the beginning of the month, the Brownmen sent a list of demands to Hausemaster and said that they would stop the lag if he agreed to the demands. Most of their demands were about the basic game mechanics of the server being broken and the countless problems the server had over the years that Hause didn't bother to fix. Hause did end up fixing some of the broken vanilla features, including elytras, and he removed all priority queue bans, but many of the demands were not met. Unlike the previous year, queue size did not decrease by any substantial amount over the month.

Snowcone is the codename for mass kick exploits. The majority of snow cone methods were undetectable by Hause, which allowed members to use it without worrying about priority bans.

The main use of snowcone was skipping queue after Hause priority banned a lot of accounts. There was a channel where queue skips would be announced, players would get in queue at the right moment and get into the server within minutes (in the normal queue). This worked by kicking players off the main server without crashing it.

There were 11 total Snowcones, each being used once the latter was patched. Notable ones include: 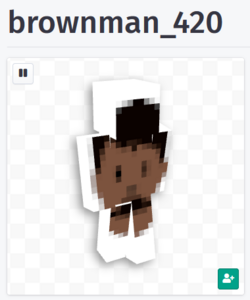 brownman_420, a member of the Brownmen. All members of the group use this skin. 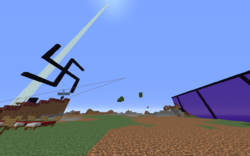 They don't have strong relationships with other groups. But there are still some alliances because of past cooperation with some of these groups listed below.

Retrieved from "https://2b2t.miraheze.org/w/index.php?title=Brownmen&oldid=57957"
Categories:
Cookies help us deliver our services. By using our services, you agree to our use of cookies.