From 2b2t Wiki
Jump to navigation Jump to search
Bookbanning is the act of effectively banning a player by giving them a shulker full of books, each book having maxed-out characters, or a large amount of characters. When opened, it will overflow the packet's data, and if the packets are too large, the victim will be disconnected. It is impossible to reconnect without disconnecting immediately after. Ban books are often renamed to other items to trick players. 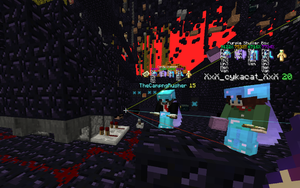 Hausemaster stated in early June 2019 that bookbanning would be fixed and that anyone who is book banned can reconnect again.

Bookbanning was used by The Book Club to book ban over 400 newfags in October 2019 using "chambers" which had the same design as trapped nether portals, except they had dispensers that dispensed book ban shulkers to the new players, instantly updating their inventory to ban them.

Bookbanning was patched by Hausemaster but it took away the functionality of .peek and preview, popular hacks that allowed you to see the contents of a shulker box without opening it.

Retrieved from "https://2b2t.miraheze.org/w/index.php?title=Bookbanning&oldid=61775"
Categories:
Cookies help us deliver our services. By using our services, you agree to our use of cookies.