This is the stable version, checked on 19 January 2021. 3 pending changes await review.
Jump to navigation Jump to search

ZiggyBase or Ziggy Base, often incorrectly called Ziggy Town or ZiggyTown, was a base built in January 2012, and abandoned later in mid or late 2012. It was re-inhabited in 2014, although was found months later and griefed a second time. The base is best known for the Bedrock Comet. Not so far away from the base is a big part of dried-up ocean, walled off from the water with bedrock, given the title of the "Bedrock Dam". Builders got the bedrock through popbob's backdoor, which allowed him to select players to teleport to, fly, and use the Not Enough Items mod to spawn items in. One of the members who got these perks made stashes out in the millions filled with illegal items, including bedrock. It was one of many bases that had the signature "town" in its name, as bases back then were generally called towns. The base was eventually griefed by an unknown player back in 2012, possibly Acid1212 or Harblax. Region files of the town can be downloaded here (superflat world).

The base comprised standard Minecraft castles and houses. It was more colorful than Passie Town due to the fact that it was built in a different Minecraft update, which introduced new creative blocks that players could use.

The Bedrock Comet was completely destroyed in August of 2020 by the Anti Bedrock Society and the Klansmen.

During the time of the base's founding, NFE was being repeatedly griefed, and a famous group base, SquidBase, had been abandoned.[1]

ziggy_s, who had built at NFE, as well as passie05, traveled to -400, 800, NFE's Overworld coordinates, in the Nether. They found a portal there and traveled to the Overworld, where they found a "strange abandoned tower with trees growing around it and underground farms", as recounted by xcc2. It is unknown who built these. ZiggyBase was founded at this location[1] in January 2012. 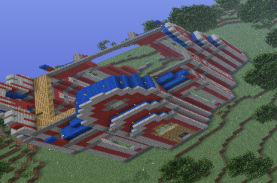 popbob also arrived at the base, though did not build anything. After getting into a verbal conflict with Branillion, a new 2b2t player invited to the base by xcc2, he griefed Branillion's underground farm, causing him to leave the server.[1]

During The Rusher War in mid-2016, taylo and jared2013 attempted to defend and protect the ruins of ZiggyBase by covering it in a lavacast.[1] Over the years, many different players and groups contributed towards the ruined state of ZiggyBase.

Despite the base being destroyed and lavacasted, Bedrock Comet remained as a well-known landmark, as it was impossible to grief without exploits. 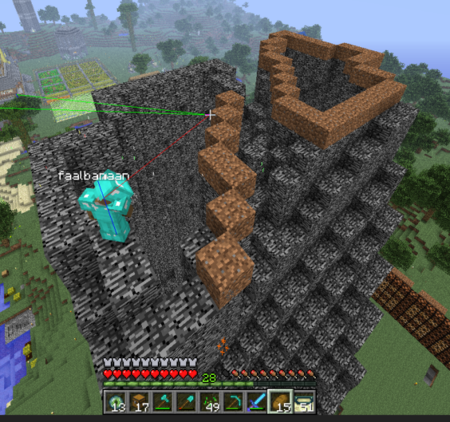 The Bedrock Comet was constructed in June 2012 mainly by passie05.[2] passie was very careful when placing blocks, double-checking for each block. He stated, "I think I ended up miss placing [sic] 2 blocks but it's hard to tell on such a massive build".[3] Despite its name, the build was not a comet, but is based on a marker from the Dead Space franchise. 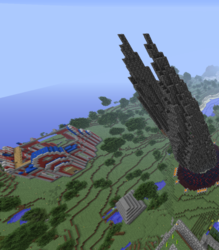 The Bedrock Comet during early construction of ZiggyBase

Later in November 2019, Brownman members built a ban chunk that encased the bedrock comet. There were also three other hollow ban chunks built to make it looks like one structure, so that if an admin were to use WorldEdit to remove it, they wouldn't realize that the comet was also deleted. The ban chunk builders spread fake screenshots of the comet being reverted to stone around 2b2t Discord servers and subreddits to trick players into going there and getting banned.

In April 2020, shortly after the lavacasts had been removed from ZiggyBase, a furnace chunk ban was set up by a few members of The Brownmen, known as the April 8–10 Chunk Ban. The group would later expand the project and name themselves The Bakery. On April 10, an invitation to a "party" at the Bedrock Comet, promising kit giveaways, storytelling, and trading, was posted on the subreddit, prompting many unsuspecting players to go to ZiggyBase.[4] Dozens of players would be chunk banned over the next few days due to this, and it even gained the attention of Fit, who would later make a video about it. Hausemaster made attempts to remove the chunk ban but it was fairly easy to set it back up. After a week, The Bakery moved operations from the Comet to 0,0 Overworld. 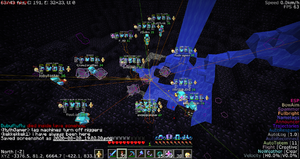 The Battle Of Ziggy Town between the Anti Bedrock Society and the Klansmen.

The Bedrock Comet remained as one of the last standing bedrock builds until August 20, 2020, when its last blocks of bedrock were destroyed in the culmination of a large PvP fight known as the Battle of Ziggy Town. Most of the blocks were destroyed by the Klansmen and their allies, but a temporary sub-group of Armorsmith's Followers known as the Anti Bedrock Society was able to take control of the Comet with the support of Team WAO. It was under their control that the last bedrock block was removed. This would result in a debate between the two groups over who should get recognition. passie reacted to the destruction of his Comet with a post on Reddit the following day, titled "The end of the marker, fun while it lasted". The post garnered almost 3,000 upvotes in two days.[5]

"Today some nobody's removed the last block thinking it would make them famous somehow but I doubt it will. But that's how it is on 2b2t you build something hoping it will last but in the end it will always be destroyed one day or another."
―passie05[5]

Retrieved from "https://2b2t.miraheze.org/w/index.php?title=ZiggyBase&oldid=50169#Bedrock_Comet"
Categories:
Cookies help us deliver our services. By using our services, you agree to our use of cookies.