Aureus City was made over a year before the Rusher War, started on May 31st, 2015. The base was founded by CainesLaw and Tachrev and was the largest base of 2016. It was home to many old and midfags including Fit, James_Rustles, SnackyNorph, and 12 others. Aureus City was also known as the City of Gold due to the massive gold farm they had. The gold farm produced so much gold that they started decorating the city with gold.

Near Aureus was a temple which housed a barrier block. 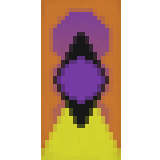 The banner of Aureus City

Sometime during early 2015, CainesLaw and Tachrev's base, Exodus, was griefed. This left the two homeless until they joined the Valkyrians at Asgard II. When Asgard II was griefed, CainesLaw and Tachrev joined the rest of the Valkyrians in the Third Incursion. After the Incursion, the two needed a home and so Aureus City was founded. They eventually began to slowly invite other players to the base, many being their former Valkyrian comrades. Them and their new base members had planned for the city to be the greatest city in 2b2t history. The gold farm was built by Caines_Law, in which it produced tons of gold. This allowed for the members to create large amounts of golden apples before they were removed in the 1.9 update. Tachrev and CainesLaw allowed their residents to build their own houses which were all built to the player's desire.

The base had beautifully decorated streets that led to several parts of the city. The streets were lined with gold from the massive amounts of gold produce from the gold farm. The base also had a lot of decorative helixes around the base. On the streets of Aureus, there were several custom and unique homes built by each player. In the underground areas, the mines were decorated with large lava pillars surrounded by gold and the sea parts of base had large glass domes and entrances. The base, while not the largest redstone base, had a lot of redstone contraptions such as automated farms, sorters, and lights that would tell the players how full the chests were. The contraptions were mainly built by Yellowstonejoe and CainesLaw, who both had redstone experience. The base also had the original shelter of Tachrev and CainesLaw, which was a small cave dug out with an enchantment table, several chests, beds, crafting tables, furnaces, and an anvil. There was a Jack-O-Lantern from Halloween and an artificial island created to keep mooshrooms in by Monkey.

A large farm with plenty of massive nether portals and rails, where you could become AFK for hours. There would also be a room under it, for all of the gold drops and nugget/ingot conversion.

Tachrev created a wall mainly out of red sandstone and gold. Walkways to multiple builds such as Monkey's Treehouse and the Aureus Wizard Tower were paved with polished andesite and granite. Netherrack on fire also dotted the wall.

Spartan512's builds in the city range from buildings to pixel or even map art. Most of Spartan512's pony pixel art is located in a part of the savannah known as Pony Valley. Included here is a map of Rainbow Dash and other pixel art. Spartan512 also created a library which is probably based on Twilight Sparkle's library in the show.

A tower that is mostly empty, overlooking the guardian farm. The top floor looks like a Jack-O-Lantern if you zoom out.

Hayor's cathedral was never completed, but what had been built was already quite beautiful. It likely would have been completed long ago if the city's coordinates were never leaked. Plenty of resources were gathered and space was cleared in preparation for the build.

A very large treehouse modeled after a jungle tree. There are plenty of places to climb around, and the inside of the trunk has a slime block trampoline. There was also a very complicated branch system. On top of the tree's leaves was a small hut made by Jacktherippa, which was quite simplistic, made mainly of leaves. Under the house is a room made for brewing potions.

The mines contained some underground farms, such as Fit's pumpkin pie farm, and a tree farm made by Caines_Law. CainesLaw also created a sorting system, with plenty of redstone wiring and lights that indicate how full the chests are. The end of the mines had some lava pillars being poured into gold containers, as well as a map of the whole base.

James Rustles' colosseum was a massive, circular build with many water source blocks and catwalks made of wood planks inside. The arena was mainly made out of grass blocks. Only one fight has taken place in the arena, that fight being Fit v. FuZe III during the French Invasion of 2018. Take note that this fight occurred long after the destruction of the city.

A museum made by Fit, with a gallery of map art, book collection and much more. Jacktherippa's head was actually obtained here. The museum was supposedly packed up rather than griefed with the rest of the base. It was also the primary target of the griefers of the base. Thankfully, Fit took all of the artifacts from the museum, and now takes full responsibility of the artifacts.

A confusing stone brick build full of hallways, with each room having a purpose. This was where everyone slept when they first arrived at Aureus. Two large helixes surround it.

Although the gold farm in the city was much more famous, the iron farm was just as efficient. It had a small house in the middle where you had to stand to get every part of the farm working at once, and iron ingots were collected here.

A ranch built by YellowstoneJoe, with many automatic farms, such as automatic crops, pumpkins, sugar canes and more. They were automated in the same place due to YellowstoneJoe also building a villager trading hall beneath the ranch, where every single villager was kept, even ones that had been removed. They were automated in the same place so that you could trade crops with villagers for free emeralds. YellowstoneJoe also had a house here, and animal pens that seperated horses by speed.

A prismarine platform where guardians would spawn, as it was a former ocean monument. When the server updated, the build was corrupted and half the monument regenerated.

There was also an advanced mob farm where even endermen would spawn. Most hostile mobs spawned here and it was an efficient system, like the rest of Aureus.

A large tower that goes to maximum build height, and the highest point of the city. Overlooking YellowstoneJoe's ranch, the large structure was originally created to launch airships off of, but was later extended to maximum build height and ended up being used more for practice with elytra. You can fly around the whole base without firework rockets by jumping off the tower with elytra equipped. 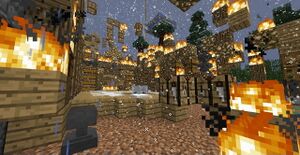 A burning building at Aureus City. This is also the thumbnail of Fit's video of him and others griefing the base.

While it may be unknown how Aureus's coordinates got leaked, the most accepted story is that SnackyNorph gave the rough coordinates to CancerChan, who acted like Snacky's online girlfriend, despite being a boy, who discovered even closer coordinates by prodding information out of Caines_Law, who panicked when Cancer guessed coordinates which lay close to the city. CancerChan then leaked them to CorruptedUnicorn and BenitoTortellini, who made the coords public. There is also another story, that the coordinated were taken from a Skype conversation between members of the city. Fit decided to grief the city, along with many other formal Aureus members, like CainesLaw, Hayor, and YellowstoneJoe, as to take away the satisfaction from the griefers to come.

Aureus City was rebuilt by The Guardsmen, as seen in Fit's video where he was initiated into the group and where The Guardsmen were attacked.

Retrieved from "https://2b2t.miraheze.org/w/index.php?title=Aureus_City&oldid=54061"
Categories:
Cookies help us deliver our services. By using our services, you agree to our use of cookies.