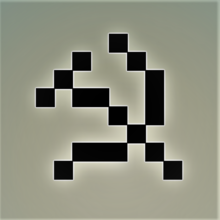 The infamous Hammer and Sickle of Armorsmith

Armorsmith's Followers is a movement on 2b2t.org that recently declared itself as an independent group with the goal to worship Armorsmith, the group's leader and "eternal god".

This movement is rensponsible for many autistic events throughout the server, and it's players are usually recognized as some of the server's greatest faggots.

Many players, including Armorsmith himself, don't take the movement too seriously.

Recently, the group begun expanding due to the AntVenom invasion, and apparently an anti-incursion movement. It brought FPS lagging to 2b2t, built a few bases and started their new propagnda project, in which they spam the reddit and chat.

Armorsmith is known for lagging the server and performing autistic actions against the community. One day, he talked with a player named uglykids and suggested the idea of a group worshipping him. He wanted to call this faction "The Soviet Reunion". Due to the lack of time, he couldn't create this faction. But he did design a symbol for it: A small hammer and sickle similar to the style of the VoCo vortex symbol.

Armorsmith would then use this symbol in every single base/ build he made, including Armorland end corner base, and his Carolina lag machine series.

Some of the elite members of the group, who showed their dedication, were trusted by Armorsmith. These players were invited to special group bases. A unique example of such a group base is 200 150. This base was constructed just less than 200 blocks away from 0,0 and it lasted for 4 months. It was built below a lava cast, and was griefed later on by the entire Spawn Mason. All of the players who worked on the base were from Armorsmith's Followers.

The group would also bring FPS lag machines to 2b2t. These lag machines were first built by a random players from a different server, and were spammed through Spawn thanks to Armorsmith and Sextinq.

The group decided to leave its mark at Spawn by building the Wrath of Armorsmith. IHackedWalmart would supply the builders with ender chests, while Metrez, Armorsmith and Pheanom worked on the Wrath. This became their new HQ. The wrath had blocks mined from the original Wrath outpost, since the group couldn't be bothered to go out and get their own obsidian. The movement recently became a group, but they still don't consider themselves to be a faction or a cult.

The group made an outpost on the April 1st map. The AntVenom invasion (the Sixth Incursion) was what made the group so large and unique. It brought hundreds of players to the group, making it one of the largest on 2b2t.

An agressive Armorsmith spam begun to take place. The group served as a nuisance during the 6th incursion while they were building their wall, and after the Fit video on that wall, they spammed withers on it. Armorsmith himself would make Fit combat log in one of their battles.

The group would also declare the independence of a new country on 2b2t with the name of Armorstate, giving their members a feeling of democracy. A president is being elected once every 6 months to run the group, however, his authorities are limited.

The group would create their own subreddit, merch shirts, social media accounts, a skin and other branches, such as the OG Names of 2b2t group run by Armorsmith and Caviyaz. The group is also known for griefing bases and being enemies of everyone on the server who is outside the group.

This section is Outdated

househousehouse1 (He quit because of arguements)

The group is very divided when it comes to ranks. Usually, a lot of players who join the discord are simply taking it as a meme and are not participating in building projects. Players can, however, rank up by posting their shirtless pictures in discord. New followers mainly focus on completing tasks, while the high ranked players are invited to group projects.