The Fourth Reich was a group founded by Tim_McNukepants in June 2016 amid the Rusher War. They began as a couple of 2b2t discord users who came together, seemingly on the basis that a large scale conflict on 2b2t could not be complete without a team of nazi wannabes as the cherry on top. Although other groups surpassed them in manpower and infrastructure during their lifetime, they still gained notoriety due to them functioning more as a separate entity than as an extension of either warring side, using player kills and griefs as advertisements for themselves only. Their focus was to become as powerful and recognized as they possibly could, by using whatever means available. They are known for having helped popularize end crystal PvP, and for griefing bases indiscriminately such as the Peacekeepers' HQ, Wrath Outpost, The Drain, and many others. 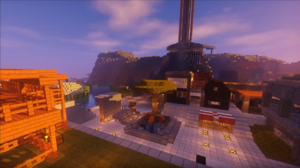 The 4th Reich was founded in June 2016 by Tim_McNukepants, P529, and Anar_NL. After false rumors that the main 2b2t discord was for oldfags only, the 3 felt excluded and decided to make their own discord and group called The Fourth Reich, shortly after they met up to make the 4th Reich Founding Base. From the beginning, the 4th Reich were the self-proclaimed sworn enemies of The Vortex Coalition and engaged in a war with them by apparently destroying their headquarters. This war was later found out to be entirely fake. After the VoCo Vs. 4th Reich War meme died down, the group moved closer to spawn and became somewhat of a sub group of Team Veteran. They then started accepting new members into the group since the 4th Incursion was about to begin. After a few weeks, the 4th Reich grew into a group of both old and new players. After several conflicts with insiders from other groups that leaked the base coordinates, all the members became temporary nomads scourging spawn and its surroundings. At some point, likely during or shortly after the war, most of the following 4th Reich bases were founded: MyrddinEmrys' Castle, Jewtopia, 4th Reich Forward Operation Base, and other minor storage stashes / outposts / lag machines.

After the Rusher War, the 4th Reich continued to obliterate monuments such as Helios, Wrath Outpost, Gecko501's Tower, and The Drain. When Fit declared that Team Veteran has become a dormant group, waiting for the next YouTuber surge, the 4th Reich increased its rivalry with Team Aurora, and the two groups began to skirmish with each other. The two eventually dragged the Peacekeepers into the conflict and the Three Way Conflict began. This conflict continued until the end of the 5th Incursion.

On December 25, 2016, 0xymoron traveled to Jewtopia and griefed it, all while streaming it live on YouTube. As the stream progressed, more players wanted to help grief. 3 hours after the livestream began, the base was destroyed. The map art built there was griefed, as well as the lag machine and many other contraptions.[1]

4th Reich members in front of Helios before blowing it up

0xymoron stated that the reason for this grief was because Tim_McNukepants disabled maps, and was griefing. 0xymoron also said that before the coordinates were sold by Tumorous, he found the base and decided to grief it.

Afterwards, Tim_McNukepants griefed 0xymoron's group base, museum and dupe stash in retaliation. This grief was also streamed live on YouTube, just to add insult to injury. This caused 0xymoron to rage and make multiple reddit posts claiming that clients were backdoored, Tim_McNukepants bought the coords, and that Knight_Vista had everyone's coordinates.[2]

The 4th Reich was a key player in the 5th Incursion as they attempted to construct an obsidian wall and their own FOB. However, the 5th Incursion was a disaster and none of this succeeded. After the incursion, the group continued griefing other bases like LordPastaYT's base, BarrenDome's obsidian pyramid, Jerico City, map art bases, and did more damage to Space Valkyria. They were also involved in the third largest battle of spawn where they attacked HermeticLock's spawn base. They also attacked Fit when he was on his way to the spawn base.

On March 16th, 2017, members of what remained of 4th Reich attacked Toshie's Melon Group at Wintermelon, waged a 16 player fight, and ended up griefing it. After this, the members of the Reich either quit the server, or joined the SpawnMasons during the rest of March. The discord remained active for a while, but no other major events were done by the Reich since Wintermelon.

The 2b2t Police was a meme created by the 4th Reich which was presented through a video series on Tavux's and their YouTube channel. The videos showed 4th Reich members pretending to be police officers while destroying bases and killing players. This group reached its apex during the Summer of 2016.

Retrieved from "https://2b2t.miraheze.org/w/index.php?title=The_4th_Reich&oldid=50068"
Categories:
Cookies help us deliver our services. By using our services, you agree to our use of cookies.