A shulker full of 32ks

These weapons have the obvious distinction of enchantment levels of 32767, written in standard numerals rather than the usual roman numerals in enchantments. These enchant levels were applied to the most useful enchantments, making them insanely powerful. These weapons were also known to have level enchantment X (10 in roman numerals) for most of the extra enchants that would otherwise crash the server. These weapons would have extremely powerful effects, like knockback and punch levels powerful enough to either kick someone for flying or to instantly knock them into unloaded chunks; fortune and looting levels that the server to crash from amount of items that would drop from blocks broken and mobs killed, thorns levels that would instantly kill anything that attacked the wearer; protection levels that would render the wearer virtually invincible; flame and fire aspect levels that would make the target burn almost indefinitely; unbreaking enchantments that would lower the chance of an item losing a durability point when used down to almost zero, and more. 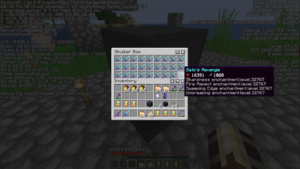 In June 2018, AlphaComputer discovered an exploit that would allow him to open shulker boxes containing 32k items and place them in his hotbar, without them being deleted by the plugin on the server that was supposed to do so. Since he, Fit, and a few other players had duped thousands of these shulker boxes the previous year, they now had access to all the 32k weapons they could ever need, and AlphaComputer once again returned to spawn to kill players with these weapons.

AlphaComputer started selling them to other players until eventually, every major group on the server had access to 32k weapons. The player HaxxorElite, who purchased 32K's, distributed them at 0,0 to random players for free and made them practically worthless, as they were more common than any other illegal item at that point.

As of December 20, 2019, Hausemaster patched 32k weapons, so that they are reverted even when in shulkers in a player’s inventory. The only surviving 32k's are in chests that have never been reopened or in unloaded chunks.

Retrieved from "https://2b2t.miraheze.org/w/index.php?title=32K_Weapons&oldid=55551"
Categories:
Cookies help us deliver our services. By using our services, you agree to our use of cookies.