2builders2tools, more commonly known as 2b2t or shortened to 2b, is a Minecraft anarchy server which has used the same map since its beginning in December 2010. The server is the second oldest continuously running public Minecraft server, as well as the oldest anarchy server in Minecraft. Considering that this is an anarchy server, player actions are generally unfiltered, resulting in considerably toxic events to occur, such as random griefs, oddities in chat, and even large scale conflicts. The server has a size of over 11.8 terabytes and has had over 689,330 players join it as of August 31st, 2021. The IP address to connect to it is 2b2t.org. The server has a vast history, which most of it is documented here.

The server owner is commonly known as Hausemaster, although it is debated if they are the same person as the one who helped start the server. He got his inspiration for the Minecraft server from the Garry's Mod server he had hosted under the name 2b2t, through 2009 and 2010, and started the Minecraft server with his friend georgebush420 in December of 2010. The owner has used anti-cheats to help keep the server stable, and has on occasions punished players that have intentionally lagged the server. The queue was added to the server in June 2016 and is the first sight a player will see upon logging into the server. Priority Queue can be accessed by donating to the server here, and allows you to join a separate, shorter queue.

On September 1, 2019, the server operator started the test.2b2t.org server, possibly to test newer server hardware. This event lasted for a few days before shutting down. The temp server came back in March 2021 to test 1.16.

Hausemaster was an oldfag and regular on the Team Fortress 2 server and clan 2fort2furious (2f2f) in early 2008. After his friend Kalash was banned from 2f2f, he began a Steam group under the name 2b2t in August 2010. The group's aim was to host servers for different games, the most prominent of which was the Garry's Mod server. Hausemaster began 2b2t's Minecraft server with his friend georgebush420 in 2010, which would go on to become the most prominent 2b2t server. There was also an official Soldat server,[1] Mumble server,[2] and a planned Half-Life 2 server.[1]

Very little is known about the creation of the Minecraft server due to the lack of web archives from late 2010 and early 2011. It was created and owned by Hausemaster and georgebush420, a "buddy in real life" of Hause. Hausemaster would refer to himself as a "co-owner", implying that they had equal power over the server. On April 28, 2011, Hausemaster stated that the server has been hosted for "seven months now", and that the map was reset to the current map one month in.[3] This dates the server to around October 1, 2010; he was most likely mistaken and was referring to November 1, however, as it would fit in with the map being reset one month later in December. It is unknown why he had reset the map, what the original map was for, and who played on it. Hausemaster mentioned that the main goal when the server began was to keep the server on the same map.[4]

"There was no main reason or big idea, it started out as any generic Minecraft test server in late 2010 where me and some friends played on to play the game. [A]fter a while we decided to open it up to see how much destruction could be made and started advertising it on various places on the internet."
―Hausemaster writing to Vice journalist, 10/5/15[5]

The above quote provides further details about the server's creation, stating that it began as a "test server" for "me and some friends"; this could refer to a few close friends, or it could refer to the existing 2b2t community. The phrase "open[ing] it up" most likely refers to when he began advertising the server on forums, instead of confining it to the existing 2b2t community.

Although there are several claims about the date 2b2t had begun in December, these are false and have no sources. There is no proof of the server's existence in 2010, especially due to the lack of Steam archives. xcc2, who joined from 4chan, claims that his oldest screenshots are from Beta 1.2;[6] having released on January 13, 2011, these screenshots are likely the oldest evidence of 2b2t's existence.

Spawn became griefed during 2b2t's first couple of days according to accounts. Self-claimed 2010 4channer pYr01v1aniac claims that most of the damage at Spawn was caused by creeper explosions in "the first couple of days",[7] as well as lavacasts.[8]

"So, in the first couple of days, most of the damage done to Spawn was from creepers. There were a lot of mobs around at that point in time, and lots of nakeds, cause advertising on a 4chan board, you just get loads and loads of people visiting, especially /v/ at that time, which was, you know, the center of the Minecraft community along with a couple of small forums, but basically, you know, the game was very popular on that board and, as for the server, you just get 50—60 people joining at a time. Um so, [spawn became] pretty much wrecked straight away—uh, lavacasts, um, creeper holes everywhere."
―pYr01v1aniac[7]

The server was commonly advertised on the Facepunch forums, 4chan, and SomethingAwful in its early days. In late 2012, the server changed its address from 2b2t.net to 2b2t.org and went down for three months.

The server population would stay quite small compared to the 2011 days from mid-2012 to June 1st, 2016, when TheCampingRusher made a youtube video on it. This brought thousands of new players to the server, and the queue (a proxy server used to house players waiting to get into the server when it is full) was added. Since then, 2b2t has only grown in popularity and become a sort of household name in the Minecraft community. The server has been discussed by a few news outlets and many YouTubers. The server reached its peak of popularity during the Mass queue influx of 2020.

As of March 13, 2011, 2b2t ran on a 40GB SSD, 12GB RAM (6GB for the server), and an i7-950. Hausemaster had a separate PC for playing and browsing on.[9] This SSD began to fill up due to speed hackers loading new chunks, and so the owners stopped advertising the server until they could buy a separate 40GB SSD to run the server on, as the one being used was shared with other files. By late April 2011, the server had received enough donations for a new 40 GB SSD, which they planned to buy the new SSD with in early May 2011.[3] The server was down for a few days in early June (as early as June 8) and was expected by Hausemaster to be back up by June 10, as it was moving onto new hardware, though it took much longer.[4]

Hausemaster expressed a need for new hardware in February 2012.[10]

As of June 3, 2019, the server runs on an overclocked i9-9900K and RAIDed NVME SSDs. The owner mentioned that, as Minecraft is limited to a single thread, the CPU chosen is the strongest single-core CPU.[11]

The server's main owner, Hausemaster tends to speak about possible future plans regarding the server. In recent years, Hausemaster commonly posts biannual updates. Some of these topics include server updates, hardware transfers, and even server motto additions and changes. However, these posts were all deleted by himself for unknown reasons, though players theorize that this is to avoid himself from being contradicted by past comments.

"There hasn't been much to say - creating a thread every week just to post "exploit or bug fixed" "further optimizations done" etc isn't really good. There has been work done for the past year on something much anticipated and we'll announce it pretty soon."
―Server administrator in an email, March 12, 2021

2b2t is expected to update to 1.16 in 2021 due to the 1.16 test map which was online from March 9 to April 12 that year. Hausemaster had also mentioned something being worked on in an email.

All other official 2b2t entities are listed below. 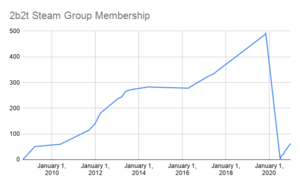 The 2b2t Steam group was created by Hausemaster in August 2008 as a hub for all 2b2t servers.

"The Garry's Mod server ip is www.2b2t.net (you have to include the www. due to how source engine works). Its focus is on simple sandbox and building, and it runs without Wiremod to encourage more building rather than putting chips and wires on small PHX plates. Server is currently down due to no interest." "A sandbox server aimed at building. Will not have wiremod to help that. Currently down until addons are fixed and a map is done."[12]

"Mumble is a free voice chatting program which is very easy to use and has good quality. The IP is 2b2t.net with default port 64738. The server is set up with a channel which allows custom public and private rooms to be created, and the server can be used for anything. Download Mumble here" "Mumble IP: 2b2t.org Default port (64738). No password. 1000 slots, a channel dedicated towards custom channels."[12]

Subreddit originally created by u/Qasaur, a player, in March 2012, until Hausemaster (u/2builders2tools) became an admin.

"Updates will be posting here regarding maintenance and other minor events."[13]

The 2b2t.net website began in May 2012, where Hausemaster demands donations to keep the server up. Later, the website moved to 2b2t.org. The website had a screenshot of Imperator's Base as the background. The site was blanked in December 2015, with text reading: "new website VERY soon (written 2015-12-06)". The website was eventually completely blanked in June or July 2016, before going down in September 2020.[14]

Retrieved from "https://2b2t.miraheze.org/w/index.php?title=2b2t&oldid=61795"
Categories:
Cookies help us deliver our services. By using our services, you agree to our use of cookies.