The logo used for the 2b2t Chronicles YouTube channel.

The original concept of the Chronicles originates back to January 2020, when a group of people came together to create a "story show" set on 2b2t. The original story consisted of a fictional player in 2011 making his way to NFE, meeting xcc2, only to have popbob show up and an argument begins. The name of this project was the "2b2t Movie Society", however, it slowly fell into inactivity, and it seemed doomed to be one of many abandoned 2b2t ideas.

However, on March 31, 2020, VillagerFilms came to Trump_17, discussing the idea of a potential 2b2t "comedy story". Trump_17 told Villager about the movie society, and invited Villager to the Discord server. The next day, on April 1, 2020, Villager started renovating everything, and fixing the server up, bringing it back to life. The ideas slowly came together to form the modern idea of the Chronicles. Production of the series itself began a few days later. Episodes 1 and 2 were both finished in April, and within a few days. However, Episodes 3 to 5 took weeks to produce for a variety of reasons. Episodes 6 to 8 were finished far quicker due to the usage of a mod called Blockbuster by McHorse. For most of the series, visual editing was done by Villager first, then the visual video was transferred to Trump_17, who did the audio due to him being praised for having very good music choice and audio work on his personal channel.

On June 10, 2020, multiple 2b2t YouTubers uploaded a video that was a teaser for the 2b2t Chronicles, them being Sato86, VillagerFilms, Trump_17, DigMC (at the end of his "the entire history of 2b2t, I guess", as well as being mentioned by fastvincent1's community tab. Then, on July 25, 2020, a full trailer was released on the 2b2t Chronicles channel, showing actual clips from the series. On August 1, the first episode was released, with mixed reception. Episodes 2 to 4 were released over the next 3 weeks. Then, there was a 2-month mid-season break before Episodes continued regularly from Episodes 5-8 on October 31st. The first season ended on November 21, 2020, which makes Season 1 last from August to November 2020, with a promise of a season 2 in a few months.

There was also an April Fools' episode containing a fictionalized retelling of the famous flame war between popbob and jared2013 that took place on December 26, 2015.

On July 1, 2021, a trailer was released for Season 2. Season 2 officially began on July 31, with the premiere episode "The Brawl of Wrath", to mostly positive reception. Season 2 ended on October 9, with a promise of a season 3.

The plot centers around a total of five fictional players that go by the username Main02, Sheriff_Motch, Rossi, Astr0 and InsaneBeach. All five players have unique personalities that dictate their actions on the server. Main meets Sheriff while escaping the spawn region during the 2nd Incursion (fall 2013), and the two become close friends, despite their dichotomy of desires (Main being an anti-griefing builder and Sheriff being a griefer.) As they go on a variety of adventures, they meet many real players, that are supposedly portrayed how they actually were at the time. Over time, as they get further from spawn, they meet more and more players, fictional and non-fictional, some who become enemies, some who become friends. Eventually, Sheriff and Main naturally grow apart due to their differences, which gradually changes them as characters. 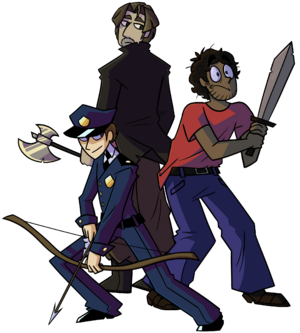 The team behind the Chronicles is extensive. Here's everyone that has contributed anything. (Note: If their specific job isn't listed, this means they have helped a lot, too much to list)

Retrieved from "https://2b2t.miraheze.org/w/index.php?title=2b2t_Chronicles&oldid=62843"
Categories:
Cookies help us deliver our services. By using our services, you agree to our use of cookies.