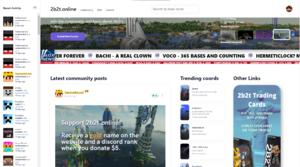 2b2t.online homepage
2b2t.online is a social network for the archival of coordinates and photos of locations on the server. It allows for anonymous submission and search of public base coordinates, along with pictures of each and the ability to comment on the build. The project was originally created by 0xymoron.

2b2t.online was started by 0xymoron in 2016. In early 2018, 0x sold ownership to Drachenstien, who recruited HermeticLock as project manager, and later gave him full ownership.

After adding features and updating the website appearance, Herm launched the 2b2t.online alpha on April 9th, 2018. A small amount of players were invited to become alpha testers. On May 14th, the closed beta was launched and more players were invited for testing. Roles were created to distinguish each player's consulting specialty, including tester, developer, designer and moderator. Bottersnike joined the development team and created some of the core features in cooperation with Herm.

in ___ of 20__ HermeticLock revamped the site making it look sleeker and more detailed, Also creating a Discord server for the users of the site

- An older copy of the 2b2t Wiki exists on 2b2t.online, which still exists to this day. These pages are from July 2018 and are direct copies from the original FANDOM 2b2t Wiki.

Retrieved from "https://2b2t.miraheze.org/w/index.php?title=2b2t.online&oldid=59623"
Categories:
Cookies help us deliver our services. By using our services, you agree to our use of cookies.