The -X Axis Highway is a highway constructed on the -X axis, heading west, and is one of the four cardinal highways. It starts in the nether at (0,0) meeting the other highways. Since December 2017, it goes all the way to the world border. While the tunnel starts out being 4x4 it shrinks down to a simple 2x3 tunnel at around -164k.

The highway used to be one of the lesser developed of the overworld highways on 2b2t, with large sections of it just being a single strip of path block or cobblestone. There are very few builds on this road, the only one of significance being the -10k Castle which was heavily griefed sometime in late 2016/early 2017, with high wither usage. The 10k area has been griefed down to bedrock. The road also had large farm areas around both -3k and -12k, run by leathernugget and General_21, which were destroyed in 2017. It also had a smaller farm area at -100k before it was griefed in April 2018.

Season 7 of Doctrzombie’s Advanced Minecraft series is an exploration of the -X axis as it was in late 2015.

The -X Diggers was (and still is) a group founded by Metrez and Bramblery. They began to expand the -X Axis Highway (Nether) to The World Border, and succeeded. 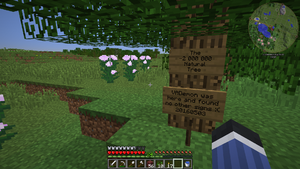 Retrieved from "https://2b2t.miraheze.org/w/index.php?title=-X_Axis_Highway&oldid=49178"
Categories:
Cookies help us deliver our services. By using our services, you agree to our use of cookies.