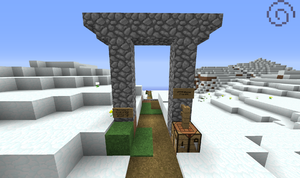 One of the many random checkpoint arches on the +X overworld highway at 47,775, 0

The Positive X Highway or the +X Axis Highway is a highway constructed on the positive X-axis, heading east, and is one of the four central highways. It starts somewhere around (0,0) near spawn and ends at Point Nemo.

It is the first highway on 2b2t that has reached the world border in the Nether, stretching for about 30,000,000 blocks, or 3,750,000 in the nether, due to the efforts of the Nether Highway Group. It is also the first highway to connect to the world corner, specifically the ++ (Southeast) world corner. The Nether Highway's maintenance are mainly kept up due to the efforts of the Independent Interstate Society (IIS), the lesser wide-spread name of the Vortex Coalition's Spawn Infrastructure Group, and The Opposition.

The Nether Highway begins at 6 blocks wide with guardrails, then transitions to a 4 block wide highway with guardrails. After some time, it becomes a netherrack tunnel currently being developed on to include obsidian in it. 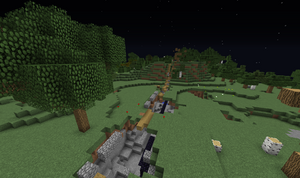 The older griefed 2 block wide section of the +X overworld highway passing over the newer underground section at 38.776, 0

The +X overworld highway starts at 500, 0 and maintains a standard of a 4 block wide obsidian road with 1 block wide guardrails at y = 61 to 67 until X = 10,000. The original builders of the +X overworld highway is unknown due to the large amounts of griefing and destruction along the highway. Past X = 10,000 the highway narrows to a 3 block wide highway and 1 block guardrails primarily consisting of stone, cobblestone, and stone bricks until X = 15,000. Past this point, the highway narrows down to a 2 block wide path that follows the natural terrain generation with many unpatched griefs and withers that make traveling down the +X overworld highway very difficult. While traversing over large oceans, the path shrinks to 1 block wide then eventually opens up to 2 blocks wide when going over land. An underground highway running along the +X axis was formed to evade the withers and excessive griefing of the highway starting around X = 20,000 and eventually joining the main overworld highway at X = 42,000. This section features many large Vortex Coalition symbols build out of obsidian and approximately 50 blocks high. Infinity Incursion symbols can also be seen throughout the highway that stand 12 blocks tall. This highway also features many old ruins of bases that may date back to 2015, however many of the structures do not have a name or information on their original builders. Throughout the highway, decorated arches are used as random checkpoints along the highway and do not use any specific pattern. Around X = 80,000 the highway narrows permanently to 1 block wide and is barely recognisable around natural terrain. Wukan's signs were also dispersed throughout the highway making smaller repair fixes and widening the highway on March 31, 2020. Around X = 115,000, one of the only traceable highway builders, Mightymike8, built a section of the road to X = 133,443 in December 2019. zBeyondix continued the highway in January 13, 2020 until its current end as of June, 2020. The original highway ended at 55,000 as of 2017, however as of June, 2020 the +X overworld highway ends at 136,590, 0. There are no current groups or efforts to extend the current overworld highway. 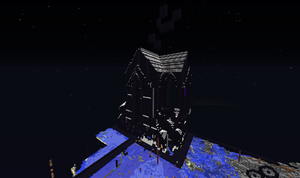 The +X overworld highway passing though a monument at 10,000, 0 with a Voco symbol on top 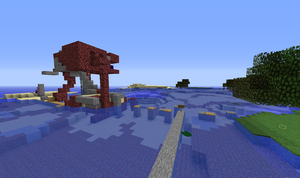 There are highway checkpoints or milestones approximately about every 25,000 blocks. The following are the more notable ones, also including some pre-built builds such as the Valley of Wheat. 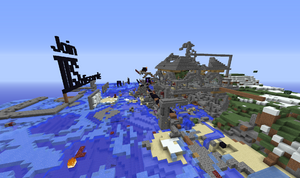 The X = 50k monument with the +X overworld highway passing through it
Retrieved from "https://2b2t.miraheze.org/w/index.php?title=%2BX_Axis_Highway&oldid=44555"
Categories: