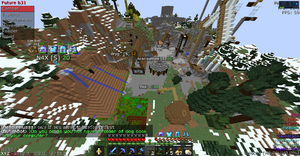 Screenshot of the spawn base.

As such, the coords were made public. Of course, as a spawn base, this was griefed pretty easily, and a few days after its construction, The Third Largest Battle in 2b2t History (15 players) occurred in the spawnbase, with some players helping HermeticLock rebuild the spawn base.

The coords have been publicly leaked by HermeticLock: -3100x -2750z

Although the base itself seems nothing special, HermeticLock planned to keep rebuilding the base, no matter how many times people would try to grief it. The spawn base is currently one of the most popular battlegrounds in 2b2t, to the point where even Fit has visited the spawn base several times.

In July of 2017 the second chapter of the spawnbase would begin, and HermeticLock would start filming again.

In December of 2017 Project Shiny, a goldfarm, was added.

The SpawnBase would be used by Incursions 6 - the purge as a place of meetup.

Cloud Club was added near the base in the Summer of 2019.