Spawn Infrastructure Group (SIG) was a highway and infrastructure group that consisted of over 70 members that worked to build and repair the highways of 2b2t and Constantiam to, "make the lives of the player base of these servers lives easier." All of SIG’s time was spent working on highways, both creating new ones and repairing old ones all over the vast wasteland whilst also creating awareness of the state of the highways. SIG also work on Overworld infrastructure that is not specifically made for travel, for example, The Southern Canal or outposts players can rest at near spawn. 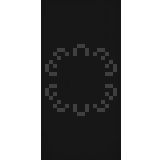 Any 2b2t and Constantiam players, new and old, could have applied to become a member of SIG, offering the opportunity for all to learn about the ways of the highways and how to maintain them.

On March 10, 2021, Coltsnid posted a statement on the VoCo subreddit announcing that The Vortex Coalition was being disbanded. Being a sub-group of VoCo, the SIG discord was deleted shortly after this announcement. 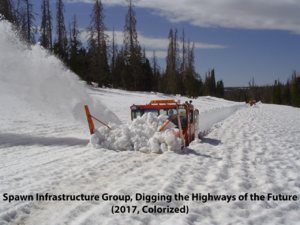 The current ranks in SIG are as follows:

This was the main chain of progression. You become an initiate by filling out an application, and you can purchase higher ranks using VoCoin, which will account to more trust in the group, as well as a higher reward for using the >daily command. You can check the cost of each rank using >ranks in #bot_commands in the SIG discord.

The staff ranks in the group are as follows:

Sr Management - Senior Management all have an equal amount of power and control over SIG.

Moderators - Moderators keep the discord running smoothly by managing chats and keeping them clean and tidy. They are apart of the SIG staff team and have influence in private and public SIG matters.

SIG was a neutral group, thus doesn't get involved in political 2b2t issues. The group had one goal, and strides to accomplish everything possible in order to make 2b2t highway travel, spawn travel, and survival for all players easier. But enemies of voco were considered enemies of the SIG.

SIG was created on November, 18th 2017. It's original purpose was to serve as an information hub. The same day, there was a post made on the subreddit. Over the next few days, SIG organised multiple spawn meetups that kick-started rapid growth for the group. SIG continued to monitor operations since then and has created big things on the server, the most notable being the 12.5k nether ring.

During the month of December, SIG started posting "12 days of SIG memes" on the 2b2t subreddit in order to gain attention and members. The posts got on top of the subreddit for the first few days until the moderators started removing SIG memes from the subreddit.

Activity continued for a while until activity started to die down. On December 28th, 2017, VoCo acquired SIG and took over executive operations from that point onwards. There was a short-lasting burst of activity until activity started to degrade again. On February 2nd, 2018, Casterly took a three month break from 2b2t. In order to keep the group running, Casterly passed discord ownership to Coltsnid and gave the Operational Manager rank (the person who ran the group) to Adriano1804.

On November 24th 2019, the SIG discord was nuked by its Operational Manager, Adriano1804, causing all channels and roles to be removed and leading to all members to be banned from the discord.

On December 7th, 2019, the SIG discord was restructured and revitalized with new roles, management and staff, beginning a new chapter in the group.

No players are currently building highways under the SIG banner deeming it inactive on 2b2t.

On March 10, 2021, Coltsnid posted a statement on the VoCo subreddit announcing that The Vortex Coalition was being disbanded. Being a sub-group of VoCo, the SIG discord was deleted shortly after this announcement.