Millennium was a 2b2t group founded in February, 2020, founded by SiKPops and lead by SiKPops and BongEatBong. The group was once ~100 members and was known by the slogan "Traps Ain't Gay" or "Traps Aren't Gay" which was a view practiced by all members of the group. Millennium's most known public activities include monuments on multiple world borders, rap dissing Emperium, heavy participation in the public April 2020 dupe, and the "Emperor's helping pill" map art by Hit_the_juul and Miraclelol. The group is historically known to spam a large amount of their banners at spawn. 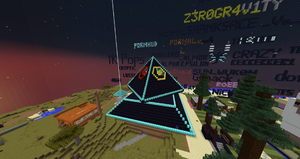 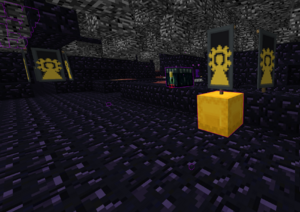 Millennium was founded by SiKPops in February of 2020. Advising SiKPops early on was Clavicus_Vile who also contributed to the cords to one of the first stashes the group would hit and created the group's iconic banner. Early Millennium had very little wealth and all members were at the first group base, Warwicks Peak. In the following weeks the group would expand to encompass more bases and after discovering several stashes they had access to more resources. Warwicks Peak was discovered by Jared2013 using the Session ID exploit and the cords were sold. The purchaser of the coordinates who was in the Discord doing an interview showed up while many members of Millennium were online and at base; the intruder was killed multiple times as all valuables were moved, and the base was then self-griefed by BongEatBong and SiKPops.

Millennium was originally allied with Emperium simply due to SiKPops' previous affiliation with said group, though neither group is friendly towards the other since the release of Millennium's first rap diss. Subsequent rap disses did not improve relations.

On April 17th 2020 all of Millennium's social media accounts (YouTube, Reddit, Google brand account) were taken over and locked-out by Emperium, with all of their members also being kicked from the Discord. This occurred due to an ex-member still having access to the master Google account, and sending a password reset to the Discord account compromising a Discord bot that had admin privileges. One of Millennium's bases, Solveig, was also griefed by Emperium due to a coordinate leak from ex-royal council Logan with help of a members account he had access to in the main discord, a insider was able to preview the screen-share in progress and extract the coordinates without joining and raising suspension.

On May 11th, 2020, founder of the group SiKPops left the group, leaving control of the group in the hands of BongEatBong. In July of 2020, many members were kicked or banned for inactivity and the member list shrunk as a result. On July 26th, 2020, BongEatBong promoted longtime member carson8858 to Trap God (leadership position) and demoted himself to focus on other things, Banana was also Trap God at the time. Less than four hours later, Bong became upset with the way carson8858 and Banana_on_2b2t were running the Discord and kicked most remaining members from the group, restoring his role as Trap God. On July 29th, 2020, members were invited to return if they wanted. Many did, though this purged many inactive members from the Discord encouraging the group to seek new members.

On August 3rd of 2020, Millennium began a group trip to the -X/-Z diagonal world border. On the 13th of August a monument was erected.

The Millennium Discord was deleted by BongEatBong on 12/26/2020 and the group became inactive.

On February 21st of 2021, SiKPops would recreate the Millennium Discord. Banana_on_2b2t BongEatBong and Clavicus_Vile were the first to rejoin. The group would later again become inactive and the Discord was deleted by SiKPops.