Due to the 2b2t Anarchy Wikia being deleted by Fandom, we have moved to miraheze to host the 2b2t wiki. The organization on the main page is temporary and more will be added soon. Please also read the rules before editing.

This wiki's current iteration was established on July 25, 2018.

Important: The fact that 2b2t is an anarchy server does not make this an anarchy wiki. Vandalism will be reverted and idiots will be banned. Please check out the rules for further information. Also, due to the convoluted history of 2b2t, some information may not be correct, unbiased, or up to date.

To get started, please click on the Navigation page to view popular pages faster.

2builders2tools, or "2b2t" for short is a Minecraft anarchy server that is also known as the world's worst Minecraft server. The server has virtually no rules, no staff, and no chat filters (with the exception of game breaking anti-cheat for things like flight and super speed). The server is the second oldest running server in Minecraft. The current map has been active since December 2010 without a single reset and it is worth over +4000 GB of memory (or 4 terabytes) and has been hosted in Stockholm, Sweden for most of its history. The server is now hosted somewhere in New York, according to the Admin. 2b2t offers its players a Minecraft experience which is unparalleled to any other server of the type and is like no other place in video games.

The player base is typically divided into three major groups: Oldfags, Midfags, and Newfags. These groups are based on the age of a player since their join date, and have been common terms since the beginning of 2b2t. Over 205,000 players have joined, but very few have stayed to become oldfags.

There are many servers based off of 2b2t with each one often going with the #b#t formula (ie. 4b4t). Most of these servers came up after TheCampingRusher uploaded his infamous video, with the exception of Constantiam and 3b3t. The server 3b3t was actually a temp map for 2b2t during the early weeks of 2015. Temporary maps are launched while the main server is unavailable for various reasons as well as during April fools events. 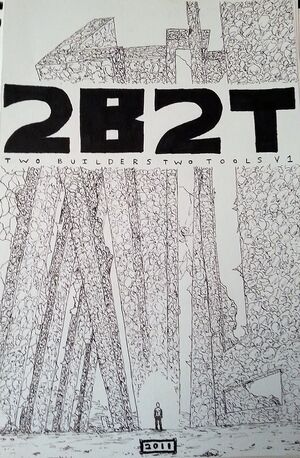 RusherB0t - A commonly known bot amongst the 2b2t community

Timeline - An extensive detailed timeline of 2b2t with over 250+ entries

2b2t Media Archive - The hub for all 2b2t content

Duplication Glitches - A page dedicated towards the history of duplication glitches